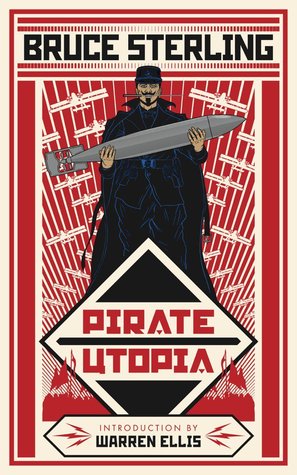 
Pirate Utopia is an alternate history novel by Bruce Sterling, an author and editor who helped define the cyberpunk genre. I was very excited to see this title. Despite my love of cyberpunk, it was the term pirate that had me hooked. Add in the alternate history and cool cover I was sold.[/drocap]

Pirate Utopia is an alternate history novel and falls well within speculative fiction. There is nothing more speculative than the possibility of Hitler and Mussolini never rising to power and the Futurists slowly taking over Italy. This is a very interesting concept set in an often overlooked place at an important time in history. However, I do have mixed feelings about the setting chosen in general. Not many people can recite the happenings of 1920s Fiume, a real place which did see an attempted take over, off the tops of their heads. This makes the story less accessible as an alternate history than many others simply because the original historical happenings aren’t as well known as other events. Actual history and alternate history can get tangled easily in the mind of the reader whereas a broader topic like Hitler never rising to power or a dragon being discovered during the California gold rush doesn’t have this issue.

The characters within the novel are, largely, all based on actual historical people. Many are changed – sometimes slightly, sometimes a little more drastically – from their historical counterparts. The majority are rather bold. All seem very confident in their beliefs and their vision for the future.

Secondari, the main character, was one I did like quite a bit. He was a bit more realistic than a lot of the other very philosophically minded characters. All he wants to do is build missiles. While he does support, or at least sympathize with The Prophet’s cause, he definitely comes across as being more obviously capable in matters of warfare, technology, and mass production. One thing I did like was when the story opens and Secondari says he knows he was killed on the battlefield that day (or something to that effect). It is a nod to the fact that the real Secondari was actually killed in action, and a nod to the book being an alternate history in general.

Pirate Utopia is a short book. Too short. Just as the story gets away from the overarching politics of the region and returns to the personal life of Secondari, it ends. New plots involving Secondari’s background and the Widow’s husband are opened up. New characters are introduced. And then everything stops. Honestly, I turned the page expecting another chapter and found only afterwords and interviews. Few of the plots are wrapped up in any meaningful way, the readers instead left to imagine the world the Futurists are building for themselves.

As for the material included at the end of the book, they were all well written, enjoyable, and added a great deal to the reading experience. However, they were rather essential to the plot, providing information on the Futurists, real world characters, and some information on Fiume itself along with an interview with the author. Now, the author does touch on why the book ends when it does within the interview. Personally, though, I find this more of an inherent issue with the novel rather than an interesting anecdote. Overall, I found the end very lacking.

Pirate Utopia held a lot of promise and was a book I was really looking forward to reading. Despite finding the real life and alternate history happenings very fascinating and having characters that I genuinely cared about, the story as a whole fell flat. Give this book a try if you enjoy alternate history or early 20th century history, just be ready for a very abrupt ending to an otherwise decent tale.