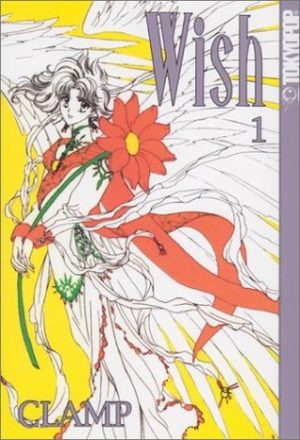 
Some of the first manga I’ve ever read was from CLAMP. I’ve read (and watched) the usual stuff – Tsubara: Reservoir Chronicle, Cardcaptor Sakura, xxxHolic. But I never even heard of Wish before I found it tucked away in a used book sale at my local library. I stared at the cover, and wracked my brain, but nothing came up. So I did what any other fan would do – purchase it immediately and worry about details like plot and why exactly I never heard so much as a whisper about this manga afterwards.[/drocap]

Wish is a four volume manga by CLAMP. Originally published in the magazine Mystery DX in 1995, it was released in four volumes the following year, 1996, before coming to America via TokyoPop in 2002.

I went into this book completely blind. I didn’t even read the summary on the back. In the story, Suichiro, a doctor, saves an angel named Kohaku from an attacking crow, and the angel then grants the human one wish. But Suichiro doesn’t have anything he wants to wish for. In order to thank Suichiro for his kindness, Kohaku stays at his home and helps with chores as she continues on her own, prior mission which is revealed in later chapters.

The first two chapters follow the well-worn path one might expect. The angel can do little in the way of cooking or cleaning, isn’t very good at household chores. She’s a bit clutzy, and feels badly for not being very helpful. Suichiro doesn’t seem to mind one way or another that she’s taken up residence. There’s a demon, the opposing force to the angels, whose day is taken up with the sole intent of antagonizing our heroine for the fun of it. And that’s the way I assumed the rest of the manga would go – a bit of a slice of life with some decent character development.

Then, all of a sudden, it was like someone flipped a switch and said ‘by the way, here’s the plot.’ The pacing is all over the place. The book starts slow, introduces the plot, and then gets slower by the end again, breaking into long exposition. Much of what we learn in the second half of the manga isn’t necessarily hinted at in the first half.

As far as character designs go, I have some mixed feelings. The use of chibi art style and the more everyday manga art style is quite clever, complete with explanations of why this occurs within the context of the story. There’s even an entertaining line or two on it in the beginning when Suichiro finds Kohaku and she’s in her chibi form. I admired the attempt at this, and it worked well, at least within the first half of the story. But, mostly, the art style doesn’t feel like CLAMP.

Some people might find this to be a good thing. Their art style is highly stylized, with limbs so long and thin that they can reach the point of absurdity. But the style is distinctly their own, and marks their work. The only place where their art style really shined was during transformation scenes when the angels or devils turned from chibi to normal again. These large, two page transformations show the usual beautiful, stylized CLAMP art style rather well, and are some of the best art the manga has to offer.

Overall, there isn’t much to make it stand out from the crowd. There’s some interesting lore about the demons and the angels. But, for the most part, a lot of the story felt like things we’ve seen before (and after). If you happen upon Wish, give it a try by all means, especially if you’re looking for a shorter series. However, other CLAMP manga is more reflective of both the art style and story they are capable of.