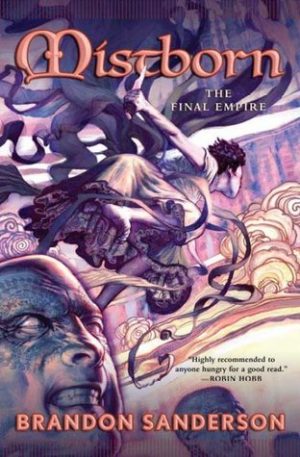 
Authors who are capable of writing from multiple point of views are impressive and Brandon Sanderson is fantastic at doing just that. When recommended this book series by a friend I was told that there’s a badass female main character with powers and trust issues. Sold.

My friend wasn’t wrong. Vin, the main character and our primary point of view on this series is fantastically skeptical of everyone around her, even after she’s learned to trust them a little. Her paranoia is not unfounded though, given the life she had growing up but there are so many things about her characterization that were enjoyable.

Sanderson’s writing style, while creating terminology for his fantasy worlds, is still simple and readable. Which, ultimately, makes his books go quickly. When authors intentionally try to use advanced vocabulary in their books, especially fantasy series like this one, it makes them somewhat cumbersome to read. While my vocabulary is by no means poor my thoughts tend to to drift in the way of “stop trying to be smart and tell me the story!” Thankfully, Sanderson doesn’t do that.

Another great thing about Sanderson, while there is romance it doesn’t not drive the plot. I repeat; it-does-not-drive-the-plot. Does it add something extra to the plot? Yes, of course it does otherwise authors wouldn’t always include some hint of romance in their works. However, Sanderson’s acknowledgement (and by way of narrative perspective, Vin’s acknowledgement) that she doesn’t need a man to love her and care for her was refreshing to read and honestly entertaining when she realized that she had developed feelings for someone.

Other than Vin we have a fantastic cast of characters, on both sides of the good and evil battle. Some of my favorite characters include Sazed and Spook. Elend is enjoyable but at the end of this first book he wasn’t my favorite man running around the empire. Kelsier is great as well but at the start of the book I knew that while I’d like him he wouldn’t be my favorite, something about his attitude, while brilliantly written, told me that I couldn’t fully place myself in Kelsier’s fan club just  yet.

Sanderson also does a fantastic job creating, not only the world for these characters, but the powers they possess. Allomancy, Feruchemy and Hemalurgy are not only complex and different from each other but also well explained and detailed enough for the reader to understand the powers, and their uses, throughout the books. It is difficult to find a series where powers as complex as these are so well explained.

If you’re looking for a fantasy series with a lot of fans to back it up look no further. This first book has an average 4.42 rating on Goodreads and, interestingly (or at least to me) received a four star review from Tamora Pierce, another great fantasy writer. So whether you read this because I said give it a try, because Tamora Pierece likes it or because someone you know has suggested it, please give it a try. It’s well worth it!