Review – A Case of Possession by K. J. Charles 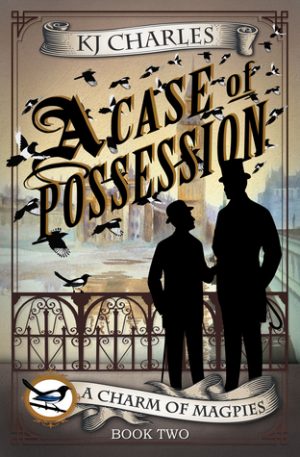 
The second book in the A Charm of Magpies series, A Case of Possession by K. J. Charles continues the story of Lucien Vaundrey, the veritable Lord Crane, and his lover, the magician Stephen Day. Things have grown more complicated for the pair. Someone is trying to blackmail Lucien about his relationship with Stephen, knowing the information could ruin both men. At the same time, Stephen is under investigation for his sudden increase in power, the other justicars worrying that one of their own is using dark, forbidden magic. All the while, there is a strange new problem plaguing London. Giant, terrifying rats have been spotted, and people are starting to turn up dead.

In this installment in the series, we see things from a slightly different point of view. While the first book was largely Stephen entering into Lucien’s world and life, this is the opposite. Lucien is staying in London now, attempting to get a shipping business off the ground. After all, returning to China isn’t possible. Not with Stephen’s entire life and work in England. And Stephen isn’t something Lucien is willing to give up. Stephen, on the other hand, is trying to juggle staying low both in the public eye and in the eye of his employers. Magicians don’t just gain miraculous power overnight, but that’s exactly what’s happened. Stephen’s own magical talent combined with his relationship with Lucien has allowed Stephen to tap into the Vaundrey’s power. And that’s not something he simply explain, not without dire consequences.

Once again, we have a fast paced story filled with emotion and romance. Emotions run high for most of the novel. The relationship which began in the first novel is strained by social convention, outside pressure, and the worry that, one day, Lucien will simply pick up and move back to China. Most of his life was spent there, after all.

Something which has struck me about these novels is the relationship between Lucien and Stephen and just how good of an example of a healthy relationship it is. Despite the obvious class difference, one never comes off as having more power over the other, especially as Stephen has power and abilities Lucien never will. Also, the pair communicate, and they do so very, very well. Unlike other, similar plotlines where the internal turmoil is drawn out and never discussed, Stephen and Lucien make sure to communicate their fears, worries, and hurt with one another. They truly listen, and they respect each other’s feelings even when they don’t agree. Not only was this very nice to see, but their relationship is strengthened by this.

The mystery is a fun, scary, winding story involving magic, giant rats, and some of Lucien’s old acquaintances from China. Lucien is called in as an interpreter, as he and his manservant, Merrick, are the other people fluent in Chinese Stephen knows. We get a better glimpse into Stephen’s life as a justicar and just what that entails. Things go from strange to extremely dangerous very quickly. No one knows where these rats are coming from, and no one knows who’s using them to kill.

The story wraps up in another fantastic, action-packed scene. It wrapped up a bit neater than the first book, too. All of the clues were there. The villains were more deftly woven into the plot compared to the first book in the series.

I’m quickly growing to love this series, and I have to admit that it’s perfect for dragging me out of this mini reading slump. I’d absolutely recommend giving A Case of Possession by K. J. Charles a read.