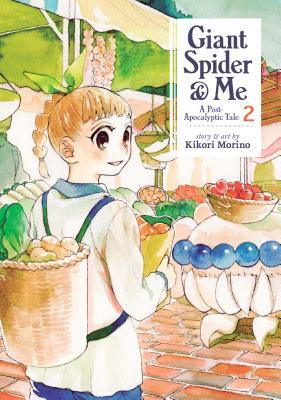 
Quite some time ago, I read the first volume of a manga about a young girl and her pet giant spider living in a post apocalyptic world. Finally, I’ve read the second volume. Giant Spider & Me: A Post Apocalyptic Tale, Vol. 2 by Kikori Morino continues the story of Nagi and her giant spider, Asa. The second volume ended on a bit of a cliffhanger, and the story picks right back up where we left off here. Nagi’s home was damaged in a storm. Unable to repair the roof herself, she must venture into town and find someone willing to do the work. However, most people see giant spiders as monsters, not pets, and contention arises.

This volume, like the first, is a slice of life tale centering around a young girl living alone in the woods. Her only company is a giant spider she found and befriended who now lives with her and behaves like a giant dog. This is their story of friendship and survival in a post apocalyptic world.

Each chapter features some kind of food, and includes a recipe for the dish. All recipes require relatively few ingredients. While I haven’t made any yet myself, the directions aren’t very long or complicated and seem easy to follow. (One day I’ll make a few of these dishes. One day.)

I enjoyed the interactions between Nagi and the townspeople. While Nagi sees Asa as her lovable pet, the others, obviously, feel differently. While we, the reader, know that Asa is harmless, its easy to understand the townspeople’s fear and concern. This is a creature that normally doesn’t get on with humans, and Nagi not acknowledging that can be worrying. Here, she really feels her age, not only trying to defend Asa, but not acknowledging the potential for harm that Asa does have.

Several new characters are introduced here. Some remain unnamed. Others seem as though they may play more important roles in future volumes. The most important of these characters is Belle, a girl round Nagi’s age. Like most of the other townspeople, she finds Nagi a little strange at first, and doesn’t understand why she’s taken a giant spider into her home as a pet. Yet, over the course of the volume, the two begin to understand each other more.

This back and forth between Nagi and the townspeople creates much of the conflict in this volume. The other major event is Nagi’s struggle to get someone to patch the large hole in her roof, something that’s compounded by their distrust of the giant spider.

Once again, we are left on a bit of cliffhanger. And, once again, I will absolutely read the next volume to find out what happens next.

If you like slice of life stories, Giant Spider & Me: A Post Apocalyptic Tale, Vol. 2 by Kikori Morino is a manga you’ll want to check out.