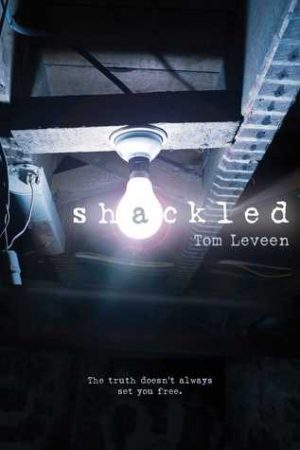 
When I want a thriller book I can be pretty picky. To that end picking up Schackled by Tom Leveen was a great decision. A distressed main character, a driving force behind all of the character’s actions and an intriguing plot had me hooked quickly and I must say that this was the perfect, quick, thriller I had hoped it would be.

Pelly, the main character, is most importantly, strongly written. It’s easy when reading about a character that has had a difficult past and suffers from mental illnesses to be lost in their past and illness. While it does affect Pelly quite severely the book is still readable from her POV.

While I know some people aren’t fans of teen thriller novels then I suggest you don’t read them. If this is your wheelhouse you should give this book a go. The pace is on point and it’s easy to get that instant gratification from a solid, fast read. From the moment you meet Pelly until the end of the book your mind is with these characters.

On a personal note I relate to Pelly (not because I witnessed the kidnapping of a best friend) but because a friend of mine is considered missing and there is not a single day that goes by without thinking of him. It is this part of my mind that sometimes determines my actions just as it does to Pelly. She is driven by anxiety and thoughts of her missing friend Tara. It is this that drives her to so ferociously persue the man in the coffee shop and his “daughter” after the young girl mouths “help me.” I myself am guilty of grabbing complete strangers and spinning them around to look at me when I see people that resemble my friend. Maybe it is this factor that affected my opinion of the book but regardless I was able to relate to Pelly on her emotions and it drew me further into the book.

Another great thing about this book is the tagline on the cover. “The truth doesn’t always set you free.” Whether that applies to the characters within the book, your own life or as a philosophical point of discussion it helped draw me to this book.

Pelly’s inner thought process is similar to everyday life for many people. Her sarcastic, self-deprecating thoughts are true to characterization and are part of what being a teenager is. The fact that Leveen has so adequately added this in, without every word in his novel dripping with annoying teenage angst, is cause to applaud him as a writer.

Another bonus is that, while there is a hint of romance in this novel, it doesn’t take over or replace the focus of the novel. In fact, the character of David serves as a supporting role. He isn’t some big, superhero type. Despite his bravery he is not perfect, nor does Pelly see him that way which I loved because, honestly, the fact that he isn’t perfect is probably why she liked him to begin with. I know that what would have drawn me to him. (Adorable, awkward and willing to go with a crazy theory of mine into certain danger? That’s a good boyfriend to have at any age.)

One of the few problematic moments was later on when the older couple, rather than logically calling parents, just took the kids to their house. 1. In what world do people do that in? 2. In what world would kids WILLINGLY do that? I mean, yes circumstances are a bit odd in this book but seriously…this just didn’t fit.

In summary, if you want something good, quick with a hint of suspense…go for it.