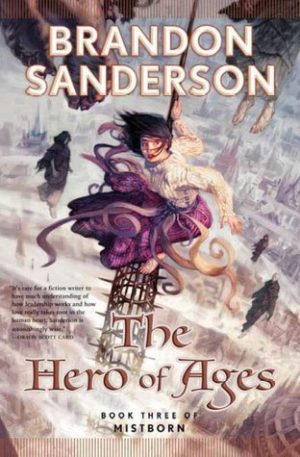 
Returning to the world of Vin, Elend and the rest of Kelsier’s crew was enjoyable and it kept me hooked on this series. The action is still there, the characters are still well written and the story only gets more complicated from here on out.

If you haven’t read the first two books…go back and do that before reading on. The story picks up  after the previous book left off. From here on out there are SPOILERS.

After Vin’s agonized decisions regarding the power in the Well of Ascension, Elend’s life in the balance, and Vin’s hesitance to become anything more to the people around her we see the true power of Vin. Sacrifice. Her selfless choice, to do what is right and not what she most desires (saving Elend) changes the world. As a result, and by essentially what I would term, pure luck, Elend is saved and now an Allomancer. He joins Vin in the quest to stop Ruin and the other powers of the universe that align against them, against the world and those they seek to protect.

It is learned that the Lord Ruler had prepared for his own downfall by creating storage caches around the empire. Vin and Elend search for these caches, not only for their resources but for the knowledge within, hoping to find atium and anything that may help them defeat Ruin.

The remaining cast of characters we know well are split between two cities, two misisons: Fadrex City and Urteau. Sazed does his best in Urteau to establish diplomatic relations while suffering with his own grief which not only affects his emotions but his belief system, he begins to lose hope in the work he had done by collecting information on all the religions from the cultures past. We see TenSoon and Breeze try to help the diplomacy in this area grow all while trying to puzzle out why there are so many changes in Spook.

In Fadrex, Vin and Elend are working furiously to figure out why the mist is killing people and discover the connection between koloss, kandra and Inquisitors. We also see Elend continue to struggle politically, trying to keep the people with him and the new ruling party without becoming the dictator they had overthrown. Vin, after struggling for her freedom and to save Elend, ascends to become Ruin’s counterpoint, Preservation. This new power, this new status, adds further layers and internal strife for Vin who longs to fix all the wrongs in the world but to also finally have a chance to rest.  Elend’s battle continued and, in the end, it is the joint effort of the couple that does indeed save the world, even if they cannot save themselves.

A twist in the story’s ending centers around Sazed. While Vin and Elend were important to the outcome, perhaps no one was as important as Sazed. While there are spoilers above I don’t wish to tell you everything about Sazed’s role as this not only becomes the true center of the world that is reborn but it also made me, a fan of Sazed from the first book, thrilled to see and learn how it all came about.

I feel that for some people this is one of those series you will love from the first book or hate from the first book. If you’re at the third book you probably love the characters as much as I do and therefore, would have a hard time finding fault within this book.

If you’re looking for a fantasy series with a lot of fans to back it up this, and the rest of Brandon Sanderson’s works should work wonderfully for you.