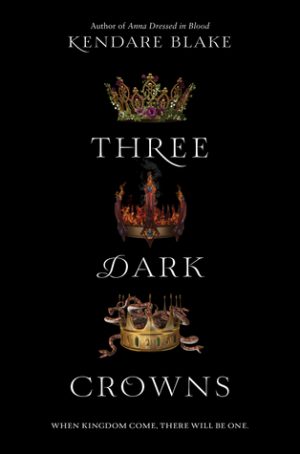 
Three Dark Crowns by Kendare Blake is a book I’ve heard a lot about. A dark tale of three sisters vying to be queen, each dead set to murder the other one in order to gain the throne, it sounded quite intriguing. In Three Dark Crowns the land of Fennbirn is ruled by a queen. Each queen gives birth to triplets, three girls who possess different magical abilities the most common of which are power over the elements, power over nature, and the ability to create and ingest any poison. The night they turn sixteen marks the beginning of the battle to be queen. Only one sister will emerge victorious, and only after the other two are dead.

The story is told in the third person, switching from one sister to another on a chapter by chapter basis. The prose is quite lovely. I really like the book’s writing style. The use of present tense adds an element of immediacy to the story. The danger to the sisters feels real and palpable.

The majority of this first novel in the series is taken up with readying the sisters for the ensuing fight. The three sisters – Katherine, Arsinoe, and Mirabella – go through an understandable amount of angst at the prospect of fighting their sisters and even more so at the prospect of their possible deaths. Two of them will die, a fact that cannot be ignored. A lot of time was also dedicated to romance. That in and of itself isn’t necessarily a bad thing. These are characters with lives and feelings who are vying to be queen. It makes sense that noble families want their sons to formally present themselves and begin courting the girls for a chance to become king. However, there is a wholly unnecessary, rather questionable love triangle. I didn’t find myself invested in the love lives of the sisters or the secondary characters, of which there was quite a bit.

The setting of Three Dark Crowns had some very unique features and interesting world building. I really liked the use of a matriarchy with a ruling queen and the constant birth of daughters who vied for the throne. This is different than what is found in many other fantasy series, young adult or otherwise, and was a refreshing change of page. I also liked the use of magic within the story. Not only are there many different types of magic, but their users belong to separate and opposing factions with their own personal and political goals. Besides that, it was interesting that magic was only prevalent within the ruling family and on the islands where the girls were raised while none, or almost none, was found on the mainland itself.

There were some questions I did have concerning the matriarchy which were never addressed. For instance, why would the previous queen accept simply stepping down from the thrown once her children were born and leaving the country presumably forevermore? I understand that this is tradition, but people do not easily give up things such and wealth, power, and influence. Moreover, who is running the country between the time of the departure of the last queen and the coronation of the next? I assume this is the council’s responsibility, but I still found myself curious as to the more intricate details of the world which were largely left unstated. The next installment may clear up these and other questions I have, but I did feel that the lack of certain information and the reasoning behind certain decisions only served to confuse the reader and not draw them further into the tale.

The biggest problem I had with this book was a lack of connection to the characters. The three sisters do not have a great deal of personality or character development to speak of. This can be largely attributed to an immense cast with a great many secondary characters. Sufficient time isn’t taken to truly explore each sister, their circumstances, and their lives. Time is diverted to many subplots, including a heavy focus on romance. This leads to an enormous missed opportunity and some very real problems with female characters. With the plot line and world building there was a great opportunity for a story filled with powerful women and strong bonds between sisters, mentor and student, friends, etc. However, this wasn’t the case. Many of the female characters were treated as weak. Now, I’m talking about Katherine and Arsinoe’s magical abilities being so far below Mirabella’s. Some of the strongest characters within the story are treated as weak. Take Jules for example. She is mentioned numerous times as being one of the most powerful Naturalists seen in many years, centuries perhaps. So why is Arsinoe so dead set on wanting Joseph to get his act together and take care of her and protect her as he should. A character like that shouldn’t need protecting. Would living in such a matriarchial society lead to thinking like this at all? As strong as Jules is, it is constantly undermined by thoughts and actions such as this. Not only is this disappointing, it is also problematic in many ways.

Overall, this novel left me feeling a little disappointed. While it had a good premise and some interesting aspects to its world building, it didn’t always follow through with that promise. What promised to be a dark tale had no murder, mayhem, or war in it almost at all. On the opposite hand, what could have been a tale about friendship and the bonds (or lack thereof) between sisters was also inexpertly handled. However, the fantasy world within the story had several interesting features and premise which, I hope, with be explored in more depth with the next novel.

If you like young adult novels, particularly those that features a good amount of romance with a dash of fantasy, you may want to pick up Three Dark Crowns.