Review – The Devil is a Part-Timer!, Vol. 1 by Satoshi Wagahara 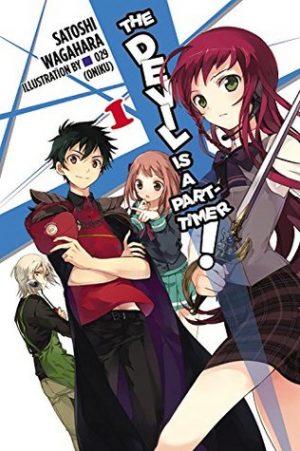 
The Devil Is A Part-Timer!, Vol. 1 by Satoshi Wagahara is a light novel (and anime, and manga) I’ve had my eye on for a long time. I watched the anime and when it became apparent there wasn’t another season coming out, at least nothing any time soon, I grabbed a copy of the original light novel. This is the first light novel in a still ongoing series about a half angel hero turned call-center employee, the literal devil working as a part-time fast food employee, and his top general as acting house-husband for lack of an army (or magic).

And it is tons of fun.

In this story the Hero Emilia has turned the tables in the Devil King’s long, protracted war to rule the world of Ente Isla. Cornered and exhausted, the Devil King and Alciel, his last remaining general, open a portal, fleeing their world entirely as they seek refuge in a parallel world – our world. Tokyo to be exact, not that they were particularly aiming for there. Any port in a storm, after all. They were supposed to wait out the immediate threat, go back, and wage war anew, but this new world has no magic, reducing the pair to two thoroughly magicless humans with no foreseeable way to replenish their magic instead of the terrifying demons they truly are. Reduced to a part-time employee of McRonalds, times are tough on the former Devil King. But it’s alright. He will take over the world, both of them now that he comes to think of it, even if the Hero Emilia is still hot on his trail and intent on killing him once and for all.

The story is written in third person point of view. There is some switching between characters, most often between Maou and Emi. Now, something about the writing style to note is the lack of character names attached to dialogue lines. More often than not this is used during conversations between two characters such as Maou and Ashiya. The characters personalities are very well reflected in their patterns of speech. This usually makes it easy to tell which character is speaking, especially if there are only two characters talking.

As with all adaptations, there are things that didn’t make it into the anime. Some scenes are extended further than we see in the anime. We’re given more details about characters, the world, and the Devil King’s life in our world before the meat of the story really begins. There are humorous lines and sections which we didn’t see in the anime. The plot, though, remains largely unchanged.

I really liked reading about Maou and Ashiya, formerly the Devil King and General Alciel. Maou excels to be the best at whatever he sets his mind to. Except, perhaps, things like budgeting, which is something he’s never had to worry about. Enter Ashiya. The former general has now been reduced to what is essentially a house-husband, cleaning their 100 square foot apartment, cooking healthy food so Maou doesn’t only eat fast-food at work, all while searching for a way to regain their lost powers so they can finally go home. The pair play off each other wonderfully.

Maou does come off as a little more oblivious towards Chiho’s affections in the book as opposed to the anime, though. Even though he’s a several hundred years old demon king this doesn’t come off as naïve where it easily could have. Because, well, he’s a several hundred year old demon king. He didn’t understand humans at all back when he was living in Ente Isla, something he admits to Emi. Even though he’s living amongst humans he’s still learning about them. In many ways Chiho’s stories about voices and earthquake warnings are much more normal to Maou than buying a new outfit for a date and flirting are.

Emi, formerly Emilia the Hero, is our other main character. Now, I didn’t immediately like Emi’s character. Her fears about what Mao and Ashiya are possibly plotting isn’t unfounded. Maou is the Devil King who sent his armies to murder lots of innocent villagers and conquer the world, after all. While he might come off as innocent at times he is really anything but. Still, Emi is gung-ho in her endevors to a fault at times, and can border on the abrasive side of the personality spectrum before some background and character development are imparted through the narrative. It took me until about halfway through to fully appreciate Emi as a character, and a full flashback to her childhood and time as the Hero to understand just how bizarre everything looked from her perspective. Everything she’s seen of the Devil King, everything she has been taught and every conclusion she’s drawn aren’t completely true because, while enemies, she never knew Maou as a person. What’s in front of her now is not what she was trained to fight against back in Ente Isla. Especially since Maou’s time in Tokyo has changed him.

But you know what I really loved about the book? The resumes of the four main characters found in the back. Those were amazingly done. From the Ente Isla qualifications like Ashiya’s wyvern wrangling license to the scribbled notes back and forth to one another, it was very well put together. They were pretty perfect and gave a very good overview of the characters, their abilities, pasts, and personalities. There’s also some handy info on ages, birthdays, and whatnot.

I’m very happy I read The Devil is a Part-Timer!, Vol. 1. I enjoyed it a lot. It’s funny, it’s heartfelt, and it has some great moments in the last fight scene. If you like humorous fantasy stories, stories about demons, or watched the anime you’ll want to pick up a copy of this.