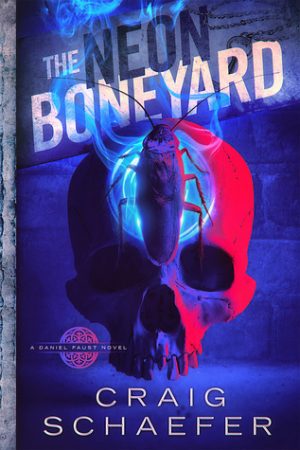 
If you want to talk about series that show growth for the characters, the Daniel Faust series had better be at the top of your list. Craig Schaefer has done it again in this installment and, if you’ve been reading the series and paying attention, you’ll know what I mean.

We could focus on the obvious growth, especially as it pertains to our main character Daniel, such as his living in a suite rather than sleeping on his adoptive father’s couch. He’s no longer a loner, getting by on simple schemes but a freaking crime boss. And, lest we forget, he’s a freaking knight of hell.

Yes, technically those last few words could count as a SPOILER but, guess what everyone? This is book number eight in the series and, unless the day you are reading this is January 1st, 2020 or after, it’s the final book currently published and available to the public. Lord help me, when The Locus Job comes out I may need to pause all other books and dive back into Schaefer’s mind. I have resisted, to date, stopping the series I was in the middle of to jump back into the world of Harmony Black but Faust is like a siren call I can’t resist. The likelihood of Harmony and Daniel being the characters to kick off my 2020 reading is very high.

Anyway, back to book number eight. I’ll say this about this book, it was one of the books in the series to give me the true heebie-jeebies and really that’s all due to the King of Worms (insert vomit emoji here) but, in all seriousness, this book stuck with me for a few days after I finished it.

Daniel continues to struggle with keeping to his morals while doing what absolutely must be done. Once again I find myself agreeing with Daniel’s choices but that doesn’t mean I’d agree with any other character ever doing the same. It just works for Daniel, hell, I expect it by this point. He’s never been perfect, he’s never pretended to be either. Maybe that’s why Daniel can get away with murder (literal and figurative) in my eyes.

Points to Craig Schaefer for the recap section of this book, to keep all of us on track with the series at this point. When you consider the first book was published in 2014 and this was published in 2018 (with eight books in between) it’s definitely a kindness offered to the readers. I really hope this continues into the next book. I will desperately need it.

As I said in previous reviews for this series, I’m now officially caught up with the series and I have to wait and see if Daniel survives book number nine. Consider me officially terrified. As this post goes lives, we are a day away from the ninth book in the series being released and I can’t wait to get that book in my hands, find a quiet space and ignore the world until I know whether or not he makes it out alive.

I’ll leave you with this. And if this doesn’t set us all up for book number nine perfectly, I don’t know what will.

“It was nice to have someone who believed in your better nature, even when you knew they were wrong.”

See you all on the other side of The Locust Job!