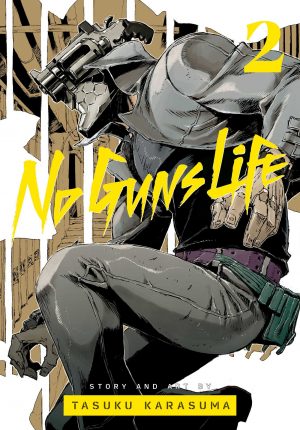 
The second volume in the series, No Guns Life, Vol. 2 by Tasuku Karasuma is the next volume in this gritty noir science fiction manga which was begun with No Guns Life, Vol. 1. The arc in this volume is in the 2019 anime adaptation of this title, which goes by the same name. Those who prefer to pick up a manga series after the ending point of an anime adaptation will want to wait for a future volume before beginning their collection.

Juzo Inui is a cyborg, and Extended. With a gun for head, along with plenty of other alterations, Juzo has no memory of his early life and works as a Resolver, taking on and resolving cases involving other Extended. This volume sees new foes, new potential allies, and deeper politics coming into play.

Olivier Vandeberme is tasked with capturing an Extended prisoner named Hayden Gondry, the very first extended noncompliant. This very dangerous man is loose on the streets, and several other people have already turned up dead. Juzo finds the entire operation dumped in his lap—its his job to find Gondry and bring him in alive to answer for his crimes, not to mention shed some light on some very shady subjects.

Duty and passionate revenge collide in a battle of ideals as a battle between Extended rages. Gondry is a man connected to Olivier’s past, and, as the first Extended, of interest to Juzo as well. But bigger parts are at play here. There are serious crimes Gondry must pay for, but as strange order begin coming down from above, Olivier calls the motives of certain government officials into question.

The lifestyle of a loner Juzo leads along with the small crew of friends who won’t leave him alone also come to a bit of head. Juzo struggles with the competing needs to keep those around him safe from unfolding events and prior enemies and trusting in his companion’s abilities and competency at protecting themselves.

The art in this manga is extremely dark and gritty. Extended characters are stylized, with cyborg elements built into their design which are quite different from the fare we usually see from similarly themed manga. The world built here is a dark one, covered in the shadows of noir and the hazy smoke of cigarettes. Its immersive, a place that’s just as fascinating as it is dangerous. Interesting use of perspective and foreshortening make the city look enormous, with buildings looming overhead and alleys closing in around characters in claustrophobic fashion.

No Guns Life, Vol. 2 by Tasuku Karasuma is a fantastic gritty noir story featuring an incredibly distinctive cyborg protagonist. An incredibly engrossing story, No Guns Life is quickly rising in the ranks of manga I’m most looking forward to. Those looking for a sci-fi story in a noir atmosphere will absolutely want to pick up this series.