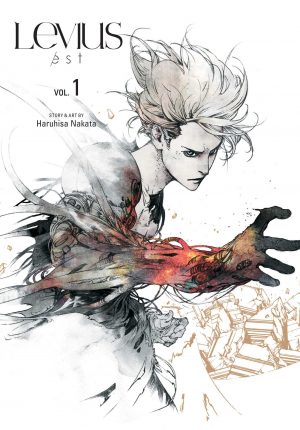 
Direct sequel to the manga Levius, Haruhisa Nakata’s Levius/est Vol. 1 is a science fiction manga. It opens after a devastating war. But now, things are different. Mechanical Martial Arts has brought the people together. Unlike normal martial arts, these are fought with cybernetically altered fighters whose blood turns into steam.

To get the most out of this manga, readers should take a look at Levius first. There isn’t as much easing into the characters, world, or story as there could be otherwise.

However, the world is a very interesting one. The aftermath of war affects both the characters and the world they live in. Some characters can feel a bit distant, and it can be hard to truly feel like you know them. This may be in part because they were featured in the prequel series first.

In a bit of a similar vein, the story felt very rushed. There isn’t time to get to know characters, or to care about them and their plights. Scenes have a tendency to end too quickly. Panels skip ahead in time, sometimes in the middle of conversation or action. Not only can this be confusing, but it cuts the flow of the story. Readers don’t ever feel like there was a satisfying conclusion to many scenes. Instead of seeing the action and resolution, panel space is wasted on explaining what happened afterwards versus simply showing it.

This is both boring, and a poor use of panels. Instead of wasting space having characters talk about what happened, just show the reader what occurred in the first place. I can’t help but feel these scenes were an odd choice.

Despite all of this, there is a truly interesting world Nakata has built beneath it all. Levius is an interesting character with an interesting background. Combining cybernetics and sports is a very cool idea that I absolutely want to see more of.

The art style is a bit sketchy in style. Backgrounds can be minimalistic in many panels, forcing attention solely on the characters. Despite being set in a post-war world with plenty of darkness in the main character’s past, the world portrayed isn’t one that’s dark and gritty. It’s a bright world, the city streets too bright, white, and blinding.

Readers of Levius will probably get the most out of this series. While I had some issues with pacing and structure, I am curious to see if these will be lessened in future volumes. In all, Levius/est by Haruhisa Nakata was a manga set in an interesting world with interesting characters but whose execution didn’t always live up to expectations.