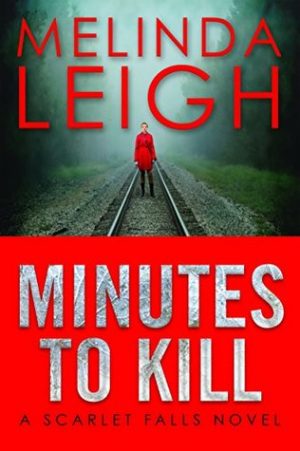 
Hello Scarlet Falls and hello book two in yet another Melinda Leigh series. I’m back again and, once more, looking beyond the romance tag to the thriller and crime portions of this novel (while also enjoying the swoon worthy heroes and bad ass heroines of this tale).

This book focuses on Hannah Barrett, the only female in a group of male siblings, raised just like her brothers to be tough and no-nonesense. Hannah is strong and refuses to just let bad things happen to herself and those around her so when she is in Las Vegas for business and a young woman needs help Hannah tries to step in. She doesn’t succeed (the odds were not in her favor with the numbers of assailants) but she doesn’t forget either. When she returns to Scarlet Falls her mind is still on the traumatic incident in Vegas but she’s also trying to be there for her family. However, when she brings up the incident from Vegas and her suspicions about crimes happening in and around Scarlet Falls she teams up with Detective Brody McNamara in more ways then one.

I’ll admit the formula of a romance novel is blatant here but having connected with Grant Barrett in book one I can’t discard his sister Hannah in this book and I’ve already read book number three so, as you can see, looking beyond the clichés sometimes really can work out for your entertainment.

Melinda Leigh should be praised for her writing skill but the following quote solidifies my respect for her as the truth of this was so close to home and so universal that you cannot overlook it.

Hope was a balancing act. Too little left a person unable to hang on. Too much made bad news unable to bear.

In short, give this series a chance. If you like thrillers and mysteries you won’t be disappointed by this series, even if romance isn’t your normal cup of tea.