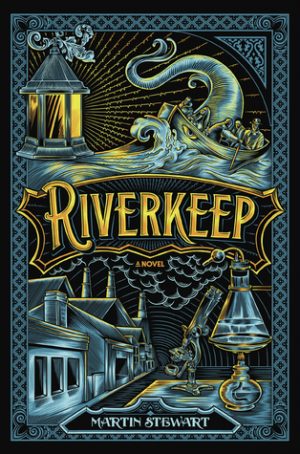 
I had my eye on this book for a long time. As in way before it was published. I only recently got my hand on a copy courtesy of the library, and delved in immediately upon getting home. Riverkeep by Martin Stewart is a coming of age story set in a fiction world where magic and monstrous creatures lurk just on the edges of civilization.

Our main character is Wulliam, called Wull for short, who is set to succeed his father as the Riverkeep on his sixteen birthday as per tradition. As the Riverkeep Wull will be in charge of taking care of the large river that runs past his house, lighting the lamps and ensuring it doesn’t freeze over in winter, managing the wildlife in the area, and removing the dead from the river for proper burial. However, when Wull’s father returns from the river not himself, Wull searches the books his ancestors left in search of answers. The only way to save his father is for Wull to set off towards the nearest city, currently plagued by a monstrous sea creature that has drifted from the pages of his ancestor’s books into those of legend, meeting new friends and unimaginable dangers along the way.

This book had a lot interesting concepts, and a world I yearned to learn more about. However, there were some issues I had with the novels as well.

The story is told largely from Wull’s point of view. Some chapters we switch points of view, most often to that of Tillinghast, one of the characters who accompanies Wull on his journey. A few other points of view were explored. These chapters were often short and always pertinent to the plot. If this is something you dislike be warned, but do keep in mind that the vast majority of the chapters do stick with Wull.

Speaking of Wull, let’s talk about our protagonist.

Wull is a fairly normal protagonist. He isn’t particularly interested in being Riverkeep. He wants to see more of the world. He’s very pure hearted and rather naïve. However, Wull also has a lack of ability to see how the motley crew he’s picked up can assist him on his quest to save his father. At first, I could understand why he saw them as freeloaders and generally unhelpful. However, each character – Mix, Tillinghast, and Remedie – bring something unique and important to the group. Without them he never would have reached his destination at all. But this is something that Wull never quite seems to grasp. There were times, especially towards the middle and end of the book where I found Wull more annoying than anything and wishing for another chapter from Tillinghast’s point of view.

More than that, Wull never acts his age. It always felt as if he were twelve going on thirteen than fifteen going on sixteen. Indeed, much of the book reminded me more of a middle grade novel rather than a young adult title. Wull’s naivety is extreme for someone on the eve of his sixteenth birthday. This only serves to make the anatomy and sex related jokes feel even more out of place than they already are. Were they funny? Yeah, they were. But they still felt a bit out of place. Jokes aside, smaller happenings throughout the novel also add to this sense. For example, Mix is the first teenage girl he’s ever met. Now, I know he lives far away from the city, but really? Sixteen years and he’s never seen anyone of the female persuasion who isn’t the middle aged undertaker?

As for pacing, the beginning of the novel was interesting, if slow. There is a bit world building and we spend some time getting to know Wull and his father. Wull doesn’t set out on his journey until probably 80 to 90 pages into the book. Once he leaves, the story’s pacing picks up and while I wouldn’t call the story fast paces, there is more action. Wull’s adventure down the river was fun to read and fraught with peril. The characters he met on the way were all very interesting, with diverse backgrounds and unique abilities. They don’t quite get along with one another. Instant friends they are not. What begins as witty banter sometimes develops into arguments. This is something I don’t often see, especially in tales that involve some sort of quest-like theme. Instead they all have common goals and are going in the same basic direction. They learn to work together. Well, perhaps for Wull who seemed to only complain about them.

I also felt that the book ended abruptly. I really think we needed just a little more time with Wull and the other characters in the end. We don’t even learn what happened to two of the characters at the end of the novel. While I understand why this was done stylistically, I do think that a few more pages would have wrapped up the story a bit more fully.

In all, this felt like a first novel. Is that a bad thing? No, of course not. There were some interesting characters, a magic system that worked differently than usually seen in fantasy novels. If you like middle grade novels or coming of age stories Riverkeep will be for you. If you don’t like stories which have oddly spelt names or abrupt endings then maybe this is a book to skip.