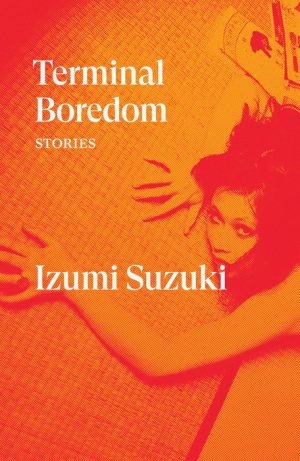 
Izumi Suzuki is a Japanese author whose science fiction works left a lasting impact on the genre and should have been translated into English long ago. Thankfully, this collection has begun the overdue task of bringing her work to a much wider international audience. Terminal Boredom is a collection of some of her short fiction translated into English and bound together in this 240 page volume.

While Izumi Suzuki is a wonderful author and one who should absolutely be read, this collection doesn’t quite do her justice. Firstly, it suffers immensely from not having an introduction to the author. This is a collection which absolutely requires an introduction by either a translator or Japanese author on why her work is so important and to provide some context for the stories and time period in which they were written. Likewise, it desperately needs a good sized author biography at the end of the book, which was also not present in galley copies, at the very least.

So, allow me to do some of the explaining that the book itself forgoes. Izumi Suzuki was an actress and writer. Her written works focused on science fiction and speculative fiction at large. Most of the stories featured in this newly published collection focus on topics such as gender, feminism, obsession, addiction and more. Now, Suzuki wrote in the 1970s, so if a few of the themes may feel ‘done before’ for some readers, but that is because these are by no means new tales from a modern author.

As for the stories themselves, I greatly enjoyed the vast majority of them. They are both interesting and memorable. Some are tales set in dystopian societies. Others include aliens. More are set in a futuristic world. But all of them center around people—what it means to be human and the concepts of gender and feminism.

“Night Picnic,” a story about a family living all alone in a city in ruins, desperately trying to replicate the life humans once in particular was a standout for me. It’s the perfect combination of unsettling and heart-wrenching, and a story which stays with you for a very long time after reading. “Forgotten” was also a stand-out.

However, many of these tales do read “very Japanese” for lack of a better term and would probably be most appreciated by those who are familiar with Japanese history, literature, or Japanese as a language. Like most speculative fiction, these short stories are all responding to and exploring aspects within Japanese culture and society during the time period these stories were written in, which may make certain choices within the narrative feel odd or unexplained or already explored in the eyes of a modern audience an ocean away.

That said, many of the themes explored in this collection are very universal, things that will be both meaningful and interesting to people all across the globe. Suzuki’s works are something to be treasured, stories which have influenced a generation of writers all around the world.

Now, I do definitely suggest reading this collection. Izumi Suzuki is a great author whose works deserve to be known by a wider audience. However, I don’t think this particular collection does her complete justice. This collection of short stories desperately needs an introduction and a biography. If you are a fan of Japanese literature or stories that touch on subject matter like gender, gender identity, and feminism in futuristic or dystopian societies, I’d suggest picking up a copy of Terminal Boredom.