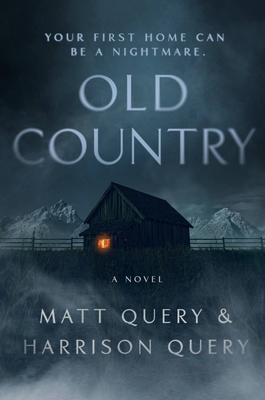 
Brothers Matt and Harrison Query bring us a horror novel of the haunting variety in Old Country. The novel hovers somewhere between a traditional haunted house novel and something verging into the territory of a mythos, with characters facing forces far beyond their understanding.

The cast is a small one, consisting largely of only the two main characters—former Marine, Harry, and his wife, Sasha—as well as their neighbors, longtime farmers Dan and Lucy. Harry and Sasha have finally bought their dream property, a nice little farm surrounded by aspens and pine forest in rural Idaho. They have nearly no neighbors, save for the elderly Dan and Lucy, whose property backs to their own.

Only, Dan and Lucy keep telling them about odd happenings, strange and unnatural things that need strange and unnatural rituals in order to counter them and keep the family safe. There are rules to follow that change every season, ones that must be very strictly adhered to, or else tragedy and terror will quickly ensue. And Harry doesn’t believe a word of it, not even when it stares him in the face. At least, he doesn’t want to.

Old Country is part haunted house story and part mythos. While the house, property, and woods are seemingly haunted, the unnatural occurrences aren’t ever-present. They come and go, giving a false sense of security to our protagonists. At the same time, this heightens the suspense as both readers and characters wait with bated breath for something else to happen, because it always will, eventually.

Despite the events of the story playing out over almost a year, the novel is quickly paced, and the page count is quite manageable. This is an inherently readable tale, one easily digestible and filled with haunts, the unknown, and creepy occurrences. It certainly settles voracious appetites for haunted house stories and frightening remote locations.

Themes of acceptance of your own actions as well as your past are explored in a myriad of ways. At the same time, there are interesting ideas of the unknown, mysterious, and unknowable perhaps being a little too familiar for comfort, and just maybe not that inherently inexplicable at all.

However, the metaphors, psychology, and other things horror so often explores aren’t quite as subtly done as with other tales. This isn’t to say that this is a pitfall of the novel. On the contrary. Plenty of novels beat their readers about the brow with their metaphors; just take the beloved dystopian novel 1984, for example. Still, this may not satisfy every reader, as the story wraps up surprisingly neatly, which was a nice twist to a genre that usually doesn’t have neat, let alone anything close to happy-for-now, endings.

Old Country by Matt and Harrison Query is a horror novel deserving a read, especially on a dark, cool fall afternoon amid the trees, where it’s all too easy to imagine yourself on a haunted stretch of land in rural Idaho.