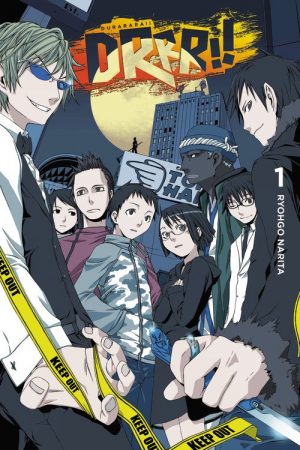 
I have not loved a book as much as this one in a long time. There is a reason why my library went out of its way (or at least deviated from its normal book purchasing habits) to get the first book in this series. Durarara!!, Vol. 1 by Ryohgo Narita is a book that has something for everyone. It’s got fantasy, mystery, and thriller aspects. Twists and turns abound, the buildup perfect, fantasy elements blended perfectly in as we traverse the streets of Ikebukuro.

The story follows Mikado Yuugamine, a teenage boy who has just moved to the Ikebukuro district of Tokyo after being accepted to the same high school as his childhood best friend, Masaomi Kida, who he hasn’t seen in person for years. Mikado wants something interested to happen, which, in Ikebukuro, isn’t very difficult. The place is full of fascinating people. A high school student with an infatuation unhealthier than most. An information broker Mikado is warned against getting involved with. An unlicensed doctor who only works with the most desperate of patients. And many, many more.

The majority of this book takes place in just a few locations. The first is a street corner near(ish) to Mikado’s tiny one room apartment. The second is at his school. Yes, other places are shown – Mikado’s apartment, the home Shinra and Celty share, etc. This limited view of the city really helps the storytelling. With this vast a cast of characters, using only a few locations was a very smart move on behalf of the author, and helped to ground the reader, providing something familiar and safe-feeling amidst the chaos. All of these characters have something to do with the area. All of them come into contact here – sometimes accidentally, sometimes on purpose – their stories starting to converge.

It was fascinating watching all of these character’s lives come together in the end. All of these people, and all of their plots, are tied and twisted together. One’s actions have consequences that aren’t immediately seen or felt, but have lasting impact nonetheless.

Now, there are a lot of characters in this book and if you are ever confused as to names, there is a list of characters at the very end of the book loosely grouped together who is largely involved with who. Within the opening pages we are introduced to several characters in rapid succession. I like the method used to familiarize, if not really introduce, us to a lot of these characters. Kida shows Mikado around the area at the latter’s request, showing him nearby places like the book store and the comic store, and pointing out various individuals who live and work nearby, and, most importantly, who to stay away from. Mikado is a bit fascinated by this, especially in the people who he’s told to have nothing to do with, all of whom seem to be constantly milling right around the corner from his new home.

Each character is a bundle of contradicting emotions and opinions, each one memorable in their own, usually twisted, ways. I instantly liked two characters for their obsession over manga and books, only to be horrified at their later actions. I felt the same about Orihara, a very shrewd character who has some interesting philosophy, but is also pretty damned terrifying in action. Ironically, the most human out of all the supporting characters is arguably Celty, who is not human at all but a dullahan.

This book does a hell of a lot of things right. The characters are complex and nuanced. The city feels enormous and evolving. Everyone knows one another, or at least knows of one another, while, at the same time, having almost nothing to do with each other on a day to day basis. The most normal, most trustable looking individuals have complex pasts, rather abnormal habits or behaviors, and are completely fascinating to read about.

I was also impressed with the author’s ability to weave these stories together. Tiny, seemingly insignificant things become very important later on in the story. Every detail is important in some way. This isn’t really a book that can be skimmed. Important plot elements will be missed that way, leading to events which would otherwise make perfect sense, or at least be aha! moments, to feel very out of left field. So be warned. Still, it is a very impressive feat.

There’s something I found in this book which I don’t believe I’ve seen before and really found I loved. The way in which the author uses language is rather unique. One passage in particular comes to mind. This is quite early on in the novel, at a point where someone is being pursued. As the individual gets more afraid, the way the author uses languages changes. Words are mashed together. Punctuation is wrongly used, or not used at all. This really made the passage stand out. The character’s fear was incredibly palpable, more so than I usual find is the case in chase or fight scenes, and the character’s emotions and thought processes brought out in ways I haven’t seen before.

If you haven’t read Durarara!! yet, go out and find yourself a copy. I cannot recommend this book enough. It was so good I immediately went online and ordered books two to six in the series, something I haven’t done in some time. If you enjoy thriller-esque stories or were a fan of the anime, definitely pick up a copy of this book. If you don’t like stories with a large cast of characters this book may not be the one for you.