Review – The Dragon Round by Stephen S. Power 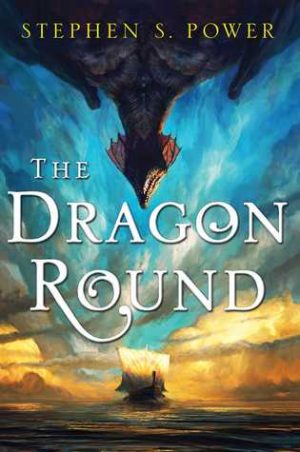 
I’d like to think that I keep up with new released in my favorite genres. But with so many new books released every year a few are sure to slip through the cracks. The Dragon Round by Stephen S. Power is one of them. The book jumped out at me when I was perusing the new acquisitions shelves at the library, but not for the reasons you might think. It wasn’t the beautiful cover design, nor was it the dragon in the title. (While I love dragons, it isn’t a make or break thing for me in the fantasy I read.)

Funnily enough, the author’s name was close enough to an old elementary school teacher of mine to make me do a double take. Even more ironically, the author’s bio in the back of the book states that he lives only a few towns away from me. I’d never heard of this author before, which was odd both because Power is a local author and because his work was previously nominated for a Pushcart Prize. So, I decided it was only fair – nay, my duty! – that I read the book.

The Dragon Round is a tale the promises swashbuckling seafaring adventure and dragons. It delivers on both these fronts, and that’s just the beginning. The story follows Jeryon, a veteran captain of a shipping conglomerate, and Everlyn, the ship’s healer and apothecary. After a dragon attack and a mutiny, Jeryon and Everlyn find themselves in a small boat adrift in the ocean. But there’s a little more than they bargained for on the island they stumble across. While devoid of people, there are dragons there. And, just maybe, the baby dragon they find can be trained.

Let me tell you something you may not know about me. I read a hell of a lot of the old swashbuckling adventure stories when I was in middle school. I went through a real pirate phase. I mean, if you asked me who my favorite literary character was when I was ten I’d probably have told you Jim Hawkins from Treasure Island, probably not something you’d hear from every ten year old. On the swashbuckling, seafaring adventure front, the story doesn’t disappoint. The book opens at sea aboard the ship Comber. We meet many of the crew at once – the captain, mates, apothecary. The main characters are the captain and apothecary, but the others are no less important, flitting through the pages of the story sometimes long after you think their portions are done.

There is a good amount of ship language, for lack of a better term. Power doesn’t shy away from using technically terms for things and expects the reader to keep up. I enjoyed this aspect a lot. It’s been a long time since I’ve read any seafaring adventure story, and it brought back a lot of good memories. However, I can see people who haven’t read anything involving old sailing ships before getting a bit lost while reading. If this is the case for you, I would definitely suggest getting the e-book version of this story. (The look up definition function on my Kindle has definitely saved me in similar situations before.)

The second third of the book takes place after Jeryon, and Everlyn when she refuses to go along with the plan, are given ‘The Captain’s Chance’ – set adrift in a small boat with no food or water in the hopes that maybe the ocean will have mercy on them. After much woe and tribulation, they are washed up on a small island. I really enjoyed this section of the book. I’ve read and liked other books where the characters were stranded on a deserted island, but this one in particular I was impressed with. No other author has made me terrified of crabs before. No other author has shown the issues of taming or training a dragon in so realistic colors.

The relationship between Jeryon and Everlyn was also wonderful. Unlike most other authors who would take the opportunity to have the two form a romantic relationship takes another, and in my opinion more realistic, approach. These two, who were little more than coworkers before, form a partnership of sorts. It’s a slow road to friendship, but the two learn to survive together. I can’t describe how refreshing it was to see two adults of the opposite sex forced into a situation where they rely on each other to become friends instead of lovers. It made the book feel more relatable and the characters more human.

This aspect permeated not just their relationship with each other, but how they trained their baby dragon as well. Two very different styles of training were presented, the two often butting heads over what would or would not work. We get to see the issues which arise from both, and, again, I enjoyed this section a lot.

The last third of the book is how Jeryon and Everlyn escape the island, and Jeryon’s long journey as he seeks justice. This is the section where I had a little trouble.

The characters we were introduced to on the ship begin to filter back into the story. We are suddenly moved to their perspective, able to see what has become of them almost two years on from that fateful day when the story opened. It was quite interesting to see Jeryon’s actions both from his enemies point of view and his own. We get to see the line between justice and revenge straddled. Often, the reader is left to make their own decisions on what Jeryon’s actions mean, if he is accomplishing his goal, or accomplishing anything at all.

Where I had the most trouble, though, is when we finally reach Livion’s point of view. We are transported to a city spoken of previously in the text yet never visited. And, suddenly, a whole host of characters are introduced. Jeryon isn’t in it half as much as I expected. Even worse, Everlyn is left out almost entirely, only getting a few pages here and there and a very brief mention at the end. I found Livion an interesting character. I wanted to learn more about him, and happily followed his perspective. However, I couldn’t really bring myself to care about many of the other characters whose perspective I was suddenly thrust into.

The story began to feel different here. The city is on edge, a war brewing on the boarders. I liked being able to see the stark contrast between Jeryon and Livion – how one’s search for justice and revenge is playing itself out and how the other has moved on, and the rest of the world with him. Yet, the things that made me love the first two thirds were largely missing – the established main characters felt more like secondary characters, there were no boats, no swashbuckling, and even the dragon aspect was mentioned only as rumors by unreliable sailors.

On top of that, I wasn’t satisfied with the ending. Important events were relayed so quickly as to feel almost glossed over. One character who’s fate I really wanted and expected to learn of was never mentioned again despite being a rather central character. Everlyn was mentioned within the closing paragraphs, but I got no real sense of closure from her story line.

In the end, I wound up giving this story fewer stars than I really expected to upon reading the opening chapters. It seems as if this is the start of a series, which can explain some of the plot lines left open at the end of this book. And you know? I would read the next book in the series in a heartbeat. Power’s prose is lovely, his world incredibly fleshed out, and I would love a bit more closure for several of the characters. If you like books involving dragons, you probably want to pick this title up. If you don’t like seafaring stories, or stories that use a lot of technical jargon, this one may not be the one for you.