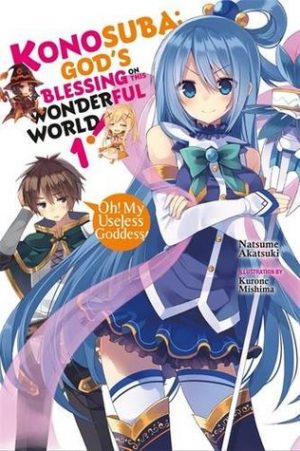 
I love everything fantasy. Fantasy novels. Fantasy light novels. Fantasy manga. High fantasy. Low fantasy. Magical realism. All of it. I’ve seen all the tropes, all the clichés, and format specific tendencies. Konosuba: God’s Blessing on This Wonderful World!, Vol. 1 by Natsume Akatsuki takes every single one of those, plays with it, and turns it on its head.

When the story opens, Kazuma is dead. It wasn’t a flashy death. It’s not even a half decent one. It was embarrassing and stupid and thank god he gets a second chance at life. The goddess Aqua is currently recruiting new souls to go to a different world, one which is currently under siege by the Demon King, who trying to take over the land. Kazuma can be resurrected in order to be one of the adventurers trying to rally against this evil, and will even be given a magical item. Kazuma chooses the best, most magical thing he can think of – the goddess Aqua herself. But no amount of video games can prepare Kazuma for the real world. Being an adventurer isn’t easy. He doesn’t have any money. Forming a party isn’t exactly working as easily as expected. And Kazuma beings to think that maybe just staying dead would have been a better idea.

Yes, this plot can sound familiar. It’s a portal fantasy, after all, of which there are plenty. None of them are executed quite like this one, however, which makes it stand head and shoulders above the rest. Konosuba is pure fun, turning familiar genre tropes on their heads. It makes fun of itself and of the genre. And I loved every second of it.

The story is told in first person point of view with Kazuma as the narrator. When the story opens he’s confident that he will be a great adventurer and that all of this will be pretty easy. He’s done similar things hundreds of times in games and believes in himself. However, things really don’t go as planned. The goddess Aqua, while powerful, doesn’t act like he’d expect of a goddess. Really, she’s pretty normal – a little egotistical and a little whiny, maybe, but very skilled and quite useful when she wants to be. Being an adventurer isn’t half as easy as games make it appear, either. No one hands you a set of starter armor and there aren’t always quests to go on. And when there are quests, not all of them are ones he finds himself and his team able to complete.

The novel’s main villain is a very intriguing character. Like the rest of the story, things don’t follow a conventional format. One of the leaders of the Demon King’s army makes a base in the area. This leads to certain consequences, but not the ones expected. The general isn’t interested in the town or its people at all. It’s just a small place, after all, filled with beginner adventurers with no real power to speak of. Still, the general does confront the adventurers a number of times. Each time is for a different reason ranging from mundane and common sense to the sort of righteous anger usually reserved for a main character on the side of good as opposed to the evil villain we have here.

The story whizzes by. Dialogue is usually not interrupted by too many he said/she said’s or descriptions of what the characters are physically doing. I’ve found this style a bit flat in the past, but Akatsuki makes it work. The characters themselves have more than enough personality to carry this tale on their own. Their voices are very, very different from one another’s with no chance of mistaking one character’s dialogue for someone else’s.

As for the magic system, it is rather like the magic system of an RPG. However, this once again turns some familiar things on their heads. Characters can ‘level up’, but where other stories glance over how this occurs, here it is explained in detail, albeit quickly. When a person kills an enemy, or even eats meat, a small portion of the other creature is absorbed. If this happens enough, ding! You level! Choosing what skills and traits to learn takes time and forward thinking.

I also found how a character learns a new skill a rather fun play on the genre. For the most part, what skill can be learned depends on how many points you’re willing to spend on it, and if you can find someone who already knows the skill to teach it to you. This has very real world consequences for the characters, what they are able to do, and how it can wildly unbalance a group. It’s easy to learn fun skills or spells that wind up almost completely useless in most real world situations, the consequences of which are played out within the novel.

Now, this is a light novel. There are some candy color haired female characters, and a few over the top personalities. While I can see a few readers getting a little tired of one or two of them, I loved them and I loved how this trope was played with in the novel. Kazuma is all too aware of his companions flaws. As much as they are his friends and companions, they can also be somewhat of a thorn in his side. It was fun to see Kazuma lamenting the fact that his entire team is over the top and can’t do anything quickly, concisely, or normally. This is made all the funnier because Aqua, Darkness, and Megumin don’t seem to fully understand that this isn’t how most adventurers distribute points for spells, practice magic in a general sense, or just behave in public. To them, they’re normal.

In a lot of ways, Konosuba: God’s Blessing on This Wonderful World! Vol 1 is at once a love letter to the genre and throws the whole thing completely on its head. It’s filled with memorable characters who are really quite lovable. This light novel is pure fun from start to finish. So much so that I’ve already started reading the next in the series. If you like portal fantasies, video games, or seeing tropes thrown on their heads, pick this one up. If you don’t like high fantasy or characters that sometimes whine, don’t pick this one up.