Review – The Castoffs Vol 2 by M.K. Reed and Brian Smith 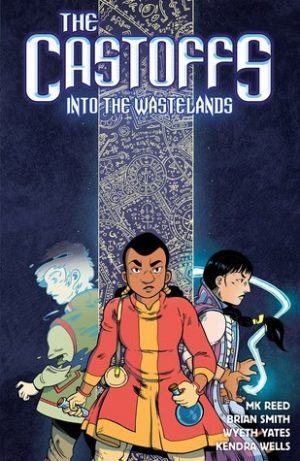 The Castoffs Vol 2: Into the Wastelands
By: M.K. Reed; Brian Smith
Release Date: October 24, 2017
Publisher: Lion Forge
Series: The Castoffs #2
Received From: Publisher
(All reviews are our own, honest opinions.)
Rating:


During the Get Graphic Readathon I read an early copy of The Castoffs Vol. 2: Into The Wastelands by M.K. Reed and Brian Smith. The Castoffs is a graphic novel series filled with magic, mechanical enemies, and a trio of girls who go from adversaries to friends.

I had the opportunity to read volume one of The Castoffs a few months ago. When the opportunity arose to read an early copy of volume two I simply couldn’t turn it down. As always, major spoilers will be avoided, but minor plot points will be discussed (nothing that wouldn’t be on a dust jacket).

If you missed the review for The Castoffs Vol. 1 or want to catch up on the events of the series you can check it out here.

This volume continues the journey of the three main characters – Charris, Trinh, and Ursa – a group of apprentice mages still learning their craft. In this volume, the girls travel back to their guild in Clifton. There, they receive a new mission, while the veteran mages go on a mission of their own as the Priestess may not be as defeated as previously believed. Though the three girls now trust one another, that trust is fragile. Ursa’s past come back to haunt her, and threatens to strain their bonds.

Like volume one, this volume featured art with lots of thick lines and bright colors. The background in some panels was quite minimalistic, something which I don’t quite remember feeling about the first volume. (Of course, the main characters were in a desert the majority of the time which in itself could be considered minimalist as far as background or scenery is concerned.) That isn’t to say the backgrounds are dull or boring. Quite the opposite, in fact. Several scenes stick out in particular, featuring a dark purple/blue background which, after the view finally zoomed out to allow more scenery in the panel, turned out to be a starry, almost mystical (and very beautiful) night sky.

Overall, I enjoyed this volume. The pacing felt a bit slower than that of the first. Normally slow pacing doesn’t bother me, but I felt the story dragged just slightly.
There is not a lot of forward momentum on the overarching plot, the still ongoing fight between the mages and their largely robotic enemies. These things are touched upon and being dealt with in a more behind the scenes fashion by the veteran mages within the Guild, but not in the very direct manner of the first volume. What we do is character development and backstory as well as a bit more about the Guild and its other members.

We are introduced to some new characters. A few mores students are introduced in this volume. Adult mages, some who belong to the guild and some who do not, are also introduced. I really liked some of the adult mages, and look forward to them being further included in the story.

The fight scenes are, once again, very good. These fights are some of the strongest things this series has to offer. Out of the three main characters only one has an ability that allows for a straight fight. Even so, all the characters are thrust into the action, sometimes on their own. The invisibility and charming abilities are used very efficiently, making for some real creativity and interesting situations.

Though this volume did feel a little slow, I liked it overall. It was a good continuation of the story with some needed downtime after the ending of volume one. Still, it would have been nice to see a little more action, or at least forward momentum, in the beginning of volume two. Even so, I will be continuing with this series. If you enjoy fantasy stories with teenage characters and a magical theme, check this series out.