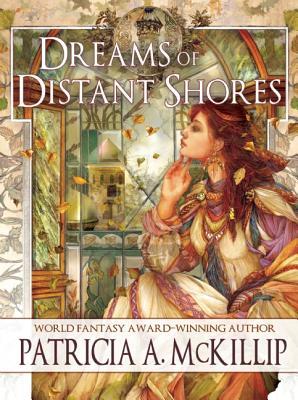 
Anthologies can be difficult to review. Each story is different and, in a perfect world, each story would stand on its own, considered for its own merits and demerits. When bound with many other short stories or slightly longer works, it becomes difficult to impossible to allow one story to stand purely on their own. Compared to those stories that come before and after it, perspective can be skewed. This is something I try not to let happen when reading an anthology, but this book in particular had many ups and downs for me. There were stories that I loved, stories that proved fun in the moment but ultimately unmemorable, and stories that didn’t live up to the expectations I had for them.

Dreams of Distant Shores by Patricia McKillip is an anthology comprised of short fantasy, namely five short stories and two slightly longer works. Some of these have been seen before, having been previously published, while others are entirely new. The stories all fall within the fantasy genre. A good number fall further into the blend of high fantasy and modernity that I associate largely with McKillip alone.

Normally I find the first stories within an anthology particularly compelling. Funnily enough, the very first story in this compilation was the weakest. “Weird” didn’t have the usual almost ethereal feel of McKillip’s usual work. At least, it didn’t feel like the other works of McKillip’s that I’ve read. The story begins rather in the middle of things with the two characters hiding in a bathroom. The story wrapped up in a bit of an open ended manner. But the story began rather in the middle of things and the ending was a bit open ended. I didn’t really feel satisfied after completing the story.

The second story is “Mer”, a tale about a long lived witch. The tone was rather similar to McKillip’s last novel Kingfisher. In this story modernity and a more typical high fantasy setting are melded together in the sort of ethereal beauty only she can evoke. It is this story that has stuck with me the longest and in most detail after reading, possibly because it so closely resembles some of her other, longer works.

The Gorgon in the Cupboard, a novella length story, is also one which I greatly enjoyed. This is partially due to the characters – the story is populated with artists and their models, which, as a former student of art history, I can’t help but find fascinating.

The rest of the stories were all good in the general meaning of the term – I didn’t dislike them, but also cannot remember them in as great of detail as I probably should. I enjoyed them upon a first read through, and would be willing to read them again. The finer details have been lost over the days between reading this anthology and sitting to write the review.

Overall, I think this book is worth reading. If, like me, you find one particularly story not working, whatever the reason may be, it is very easy to simply skip ahead to the next – and hopefully better – tale. This has always been one of my favorite aspects of short story compilations. Even if a story isn’t to one’s liking chances are that there will be another that does fit your fancy at flip of a page.

Dream of Distant Shores by Patricia McKillip is an anthology that I am glad I read. McKillip has always been a favorite writer and, while not every story was for me and some were not as memorable as others, there were one or two that more than made up for the rest.