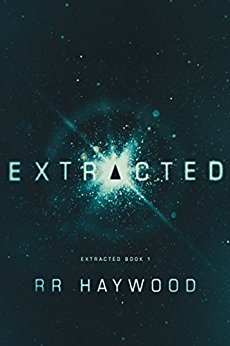 
Have you ever read a book and, when it was finished, wondered why you sat there through everything? Usually I read books I’m not liking very much because I feel like I must be missing something. Surely there is a twist that will make everything worthwhile. Perhaps I’m simply not looking deeply enough, missing some sort of grand metaphor for all the trials and tribulations of the universe. Sometimes the plot, characters, or writing simply doesn’t live up to expectations.

Extraction by R. R. Haywood sounded like a fast paced time travel novel. I always love a good time travel story. Unfortunately, this book was the opposite of paced, and quickly proved to unravel in other aspects throughout the novel.

The book begins well enough. A short prologue and the following three chapters are all rather intriguing in their own ways. The prologue sets the stage, showing a man who has given up, ready to end everything by walking into the sea and simply never stopping being confronted with his son – his grown son – when he knows full well that his child is still just a boy, safe at home with his mother. The following three chapters follow this format. Three separate characters are faced with intense situations only to find themselves whisked away by two somewhat bumbling men with a penchant witty banter.

It is only at chapter four where the books weaknesses begin to show. Our three main characters are, of course, plucked from different times at the point of their recorded death in order to save a future world. At least, that is what we are told.

This is where the story stalls for the rest of the novel. We do not see this future world that needs to be saved. The good guys hide in the past where they as safe from being found as they could possibly be. There, they prep for saving the world. We stumble upon a story filled with the mental strain of being plucked from a life and dropped into an impossible situation. This is an aspect that I liked quite a lot, at least at first. There are few novels that really delve into the nitty gritty of the human consciousness and what would actually happen if a person were plucked from their reality and dropped into a different time without family or friends and no way to return to their previous life.

However, the deep psychological break that Ben Ryder, our main character, has simply goes on for too long. The entire plot stops in its tracks as a few bumbling fools try to play psychologist – poorly. It takes most of the book and a separate incident for someone to come to the brilliant conclusion that since there is a time travel device in their compound, maybe they could just go find a doctor somewhere to assist them.

In addition to the complete blockade to the plot and action of the story, the characters also had some very deep flaws. Dialogue feels stilted and unnatural. What was simply a bit of witty banter between a couple of secondary characters quickly became normal speech patterns for everyone. But the biggest issue with characterization was Safa.
Safa doesn’t feel like a real person. Nothing she does makes much sense, nor does it feel real. Ben Ryder is her hero, and it is she who pushes the other characters to delay all of the plot in order to let her miraculously cure his intense depression by … magic? She has no real plan, no medical degree, and never comes to the conclusion that perhaps a little counseling or a little medication may help more than learning how to take apart and clean a gun. (I wish I was joking here).

Ben is Safa’s hero, though, the very reason she strived to become an officer. This too felt awkward. The sort of idealistic view Safa holds is more akin to the idealization a child holds for their heroes, the people they strive to become when they’re grown, rather than a grown woman in the police force who happened to see HIS heroic act and apparent death. It simply feels strange and awkward. That laced with the incessant repetitions of how Ben is the best and they must have his assistance, they just don’t understand – reading became extremely tedious extremely quickly.

More importantly, Safa’s past is handled very poorly. When we are first introduced to Safa she is being sexually and mentally abused by her employer. Despite this having in-chapter consequences on her mental health, it has absolutely no bearing on her during the rest of the book. It isn’t really addressed again in any real detail, something I found very odd considering the enormous weight mental health plays with some of the other characters. Then it became problematic. I find it extremely hard to believe that a woman who, few mere weeks ago was being abused, would throw herself at man out of pity. If mental health and the psychological effects of being isolation were given such importance within the novel, why was the psychological repercussions of abuse treated as nothing more than some sort of trope to filled?

The save the world plot that we were promised may as well have not existed. We never got around to actually saving the world. Despite some interesting ideas presented that go against the usual flow of time travel stories such as the effects of isolation or if time is ever really of the essence when dealing with time travel, the book fell very flat. Nothing much of interest happened. Psychological issues were treated on a superficial level. Abuse was ignored. Dialogue felt unnatural. And the pacing went by at a crawl.

I do not believe I will be reading further in this series. Extracted largely disappointed, and I simply don’t want to slog through more of the same. It is a shame, really, as the first few chapters were intriguing.