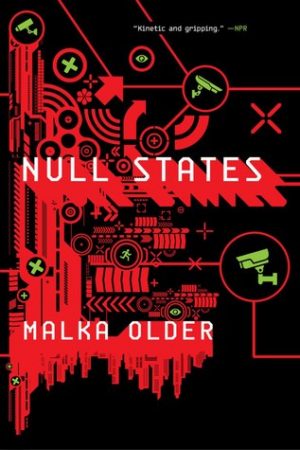 
If you enjoy political thrillers, near future science fiction, or cyberpunk The Centennal Cycle is a series of books for you. Null States by Malka Older sees the infomocracy fraying at the edges, world peace threatened, and an assassination take place in a new micro-democracy.

If you want to catch up on the series or hear our thoughts on book one in the series, you can find our review for Infomocracy here.

Null States features a new main character. Here we follow Roz as she’s sent to DarFur after it joins the world government. While the vast majority of the book is told from her point of view, certain sections do follow Ken and Mishima, the protagonists from book one. The pair are only included later in the tale, brought on board by Roz for certain plot-relevant tasks. Ken and Mishima’s inclusion felt very organic, something which could have easily felt forced if left in another author’s hands.

Yet this novel is rather different from the first. Where Infomocracy followed a world election and was set on a global stage, this is the opposite. We find ourselves within a micro-democracy on the very outskirts of the Infomocracy. DarFur has only recently shed a dictator and become a micro-democracy. The threats to the area are very different than most of the rest of the world, hold outs from an earlier time. Battles are fought on the edges of the country, and full blown war remains a threat. The nationalistic attitudes which are largely unseen in this world still run strong here.

One of the aspects I found the most fascinating about this novel is how it deals with technology and the lack thereof. Because it is new to micro-democracy, Information is not a very big presence in area. People are still wary of technology at large and of Information in particular. The constant flow of information, the knowledge always at a person’s fingertips are simply not available here. This effects not only Roz and her team’s daily life, but the assassination investigation as well. It is fascinating to see an information driven, technical society with cyberpunk aspects from a place that is extremely tech-free. I really enjoyed the way this novel explored the constant struggle of ideals between characters, what is necessary for a micro-democracy in an information driven world, and how to cope with the lack of information during such a crisis.

The pacing in the novel isn’t something I would call fast, but it worked well for the tale being told. Fast pacing isn’t something I generally associate with anything remotely cyberpunk, and the Centennal Cycle books most definitely have a cyberpunk bend to them. The last few chapters did ramp up in terms of tension and action quite bit, with the pacing much more frantic towards the end.

Null States by Malka Older is a great second novel in a fascinating book. I eagerly await the third book in the series, State Tectonics, slated for release in the Fall of 2018.