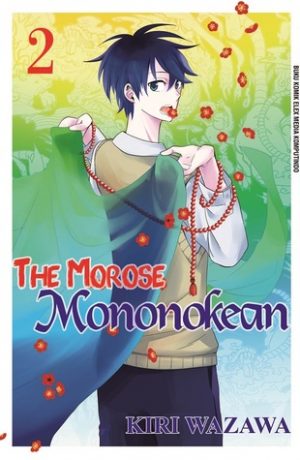 
I have a penchant for reading manga and watching anime about humans that get involved with the affairs of the supernatural, straying into worlds that they don’t really belong. The Morose Mononokean fits into this theme pretty perfectly, and I have been thoroughly enjoying this series which is currently available to read on Crunchyroll. This week I read The Morose Mononokean Vol 2 by Kiri Wazawa.

The second volume of the series picks up right where the first left off. Ashiya sets off on his first solo case. The job is straightforward enough – a demon has lost a certain mask at a shrine and needs it back. The mask isn’t just a regular mask, though. When worn, it makes the wearer laugh, and it is sure to cause trouble. Then, Abeno must visit the underworld, and after a little begging Ashiya is allowed to go as well.

This was another fun volume. There was not as many missions that needed to be completed as in the first volume. We really only see Ashiya complete the mission that was discussed in the last chapter of volume 1. Then Abeno goes to the underworld, bringing Ashiya with him after some persuasion. This was the part of the volume I found most interesting.

The underworld is an in interesting place. Despite Abeno’s warnings, it seems like a rather normal place. There isn’t anything overtly worrying about this other world. Ashiya finds himself in a town that looks like any other. The only difference is the locals don’t all look human.

The underworld concept was treated a bit differently in this manga than some of the others I’ve read. Usually, the world of demons or spirits or whatever sort of supernatural place the main character finds themselves is dangerous because humans are a target. There are dangerous creatures who live there that would like nothing more than to make a meal out of our human main character or trick them in some other way. Here the reasoning comes off much differently. This is not a place for humans. Humans aren’t liked, and the locals are very vocal about that. This is a place only for demons, not for humans, and humans are very much not welcome here.

I liked that this was different. It creates an interesting dynamic, particularly between Abeno and some of the locals he’d probably call friends. I very much want to see how this effects the characters and plot moving forward.

We meet several new characters within this volume who, I assume, we will be seeing more of in the future. Abeno also sees some character development. They need to go to the underworld specifically for more of the medicine we see him giving the Scree in the first volume. Why he needs this so badly and why it takes so long to make are unknown. And I am very interested in learning some of these answers.

I am definitely going to be continuing this series. The Morose Mononokean Vol 2 by Kiri Wazawa is fun, fluffy, and somewhat slower paced. If you like contemporary fantasy or stories featuring the underworld and its denizens this is a manga you would probably enjoy.