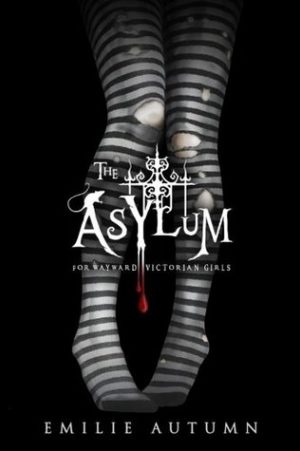 
An intriguing cover. An interesting premise. What really made me pick this book? The sale it was included in, for a cheap purchase on my Kindle. Between the sale and the slightly intriguing premise about two women, both trapped in mental asylums centuries apart, I was curious how their stories would connect and intertwine. We’ve all found great stories on the discount cart so why not on the virtual discount cart, right?

First things first, something I normally find,at the very least annoying and at the worst distracting, but it sort of worked for this story. The two heroines had the same name and, although spelled differently, Emily, with a y which is emphasized, and Emilie, the same name as the author of the book, it made more sense to me as the book moved forward.

I dislike similar/ exactly shared names and even when they are spelled differently I normally don’t like the similarity unless there is some really good reason for it. Will I say this book has a really good reason? Maybe not the best but certainly not the worst. The answer? To make the fantastical connection between characters it would go all the way down to their names, of course.

The simple distinction between the two, easy to catch on to, made it seem easy to switch my brain between the two women and the two stories I was reading. The author was careful to not write “Emilie ” or “Emily” on the top of each girl’s first page of the new chapter. Other ways the shift in POV  was distinguished, besides the terminology used by the character, was how they titled the chapter.  “Asylum Letter No. XXIX” or “hospital entry 21: four o’clock”. The simple difference in capitalization, formality and numeral choice (roman numerals vs. common numbers) helped me know whose story I was diving into as soon as I turned the page. And, like I said above, by doing this it avoided the “Emily” “Emilie” markings which sometimes, even though I enjoy POV switches, sometimes bugs me as a reader. I liked that the author found a different way to do this.

Due to the letters or diary entries being written in the character’s point of view they don’t often write their names. They say me and I and reference other people around them so these subtle differences helped me change gears without interrupting my reading flow. Again, much appreciated and a nice change of pace from the other books that switch POVs with character chapters. Most of the time it felt like I was reading a blended story, almost as if Emilie (modern) was Emily (past) but somehow immortal or vampire (a fantasy junkie can dream, can’t she?) That wasn’t the case but the subtle changes made most of the story changes flow rather than stop my progress.

So, with all of this good or decent notes above, why would I only give this book two and a half stars?

Simply put, the story didn’t grip me enough. I decided to attempt this slightly different fantasy/horror/thriller book in lieu of the fantasy book about magic and genies I’d been reading and struggling through my reading slump with. I hoped that my own struggles with depression and anxiety would connect me to the characters and their struggles. I feel I was let down in this assumption. Representation is important and that includes representation of mental health issues.

This book, however, didn’t accomplish this. Historical Emily focuses on trying to keep her dignity and beauty intact more than focusing on her deplorable situation. Yes, she mentions it but she does just that, mention it. I mean, seriously, she wonders how horrible she looks and laments her loss of proper dress, her wild hair and how dirty she is more than the fact that she and others are literally being tortured. It’s mentioned and yes, it’s horrible to her but she always circles back to being stuck without propriety. I get that, historically speaking, that would’ve been a concern of women of the day but after being in the asylum so long she really should’ve been more concerned about her overall well being and attempting any way to improve her circumstance rather than constantly hearkening back to being a beautiful Ophelia type character (as she references herself constantly.) Our modern day Emilie was upset she wasn’t given more attention by the doctors and nurses after her suicide attempt.  Emilie wonders why her suicide attempt wasn’t made fanfare and her focus on this in the beginning is extremely frustrating to me. The fact is such events should be handled delicately because sensationalizing it can prove to be damaging as well. I’m no psychologist or doctor of any kind but even I know the fact that medical professionals are trained to not overreact to such instances and statements, it’s part of their world and their job is to help people, not pamper them. Also, as the story progressed we focused more on past Emily and I feel modern Emilie was a bit lost in this way, the disconnect between her and me, the reader growing as she became obsessed with past Emily and past Emily continued to worry about herself, her appearance and how to regain some semblance of propriety and power again.

Another issue I had was with formatting and certain decisions. At first I hoped it was just because I was reading this on my kindle but the format just felt weird. Also, can someone please explain why, no matter where it was in the book, the word rat was in red and everything else was black? I get it, rats in a maze, rats in a cage, yes I understand. But if you’re going to rationalize the highlighting of a single word within a word every time it’s annoying and distracting. The word, due to the color differential would draw my eye when I turned the page and it ended up frustrating me constantly. Honestly, I would read the words eviscerate, uncooperative and separate first before returning the the top of the page because of this highlighting. It would pull me out of the story constantly.

I mean, look at the previous paragraph I just wrote and highlighted the same way, didn’t it annoy you? Another formatting issue; bold type face on portions of words happened too and I was fed up with it by that point. It was pure distraction.

After research, digging and trying to understand why the book resulted in the way it does I found no answers, only more questions. And, having come into this book only knowing the concept and nothing of the author I was surprised (but perhaps I shouldn’t have been) to find that she was a musician. The fact that both versions of herself in this book were violinists and musicians should have tipped me off but I was too busy trying to find the brilliance to pick up on the obvious. According to the Wikipedia page about this book it was published as a companion piece to the author’s musical tour, which, now that I know that, a lot more makes sense so far as why this was published and why it didn’t really resolve into a complete, satisfying story.

So my two stars are for the effort and for the concept more than anything. Writing is difficult and Ms. Autumn, a musician by profession, took on this challenge with research, creativity and hope but in the end it didn’t turn out as well as I’d hoped (and, I wonder, if it turned out as well as she’d hoped too). I will say this though, her music reminds of the type of songs I would witness performed and faires and cons and that made me smile. Definitely performance art. Like her book, I don’t love her music but she is, at the very least, giving it her all and I can’t fault her for putting in the effort.