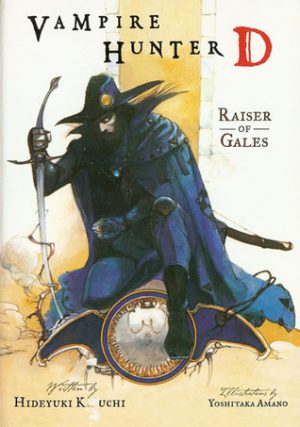 In Vampire Hunter D Vol 2: Raiser of Gales, D finds himself in the small town of Tepes. This time he was called there. A mysterious mountain with the probably abandoned ruins of a vampire noble’s manor lay close to town. After years of quiet, activity has started up again. Someone’s been bitten and the townsfolk can’t destroy that monster that did it.

The task sounds straightforward enough, but this is a story filled with twists and turns that kept me guessing right to the end. I want to be honest, though. I don’t think this book is for everyone, and the reason did knock the rating down quite a bit.

The people of Tepes do not come across as more or less good but frightened people with one or two bad apples like the townspeople from the previous book. These people come across as utterly horrible individuals that were not worth being saved. Rape isn’t some sort of vague threat D protects the main female lead from like the first novel. There is a lot rape in this novel. And it was very unnecessary. Do be warned if you don’t like reading about this sort of violence.

On the other hand, this was a volume that answered a lot of questions. We learn more about D and his past. Not everything is revealed, of course. There are still plenty of things about D, vampires, and the history of the world that remain unanswered. A bit about D’s past is learned, or at least hinted at. He begins to get more character development.

Despite enjoying this book overall I don’t think I’d reread this particular volume. The violence and sheer amount of rape was completely excessive. It’s hard to read a story when there is no one to cheer for and you’d really rather see the whole town succumb to the vampires. Still, that was the point. Despite being humans, the townspeople were not any better and perhaps even worse than the vampires. You do not need to be a monster to be monstrous, which is something the series overall tries to impart.

I was pleasantly surprised to find this volume end on an optimistic note. For a light novel so incredibly dark I wasn’t expecting anything remotely of the sort. It was very, very welcome to find the story end this way.

I do really enjoy this series, and I will continue forward with the next volume. However, I didn’t enjoy it as much as the first. Still, if you are a fan of vampire stories or stories set in post-apocalyptic setting and don’t mind excessive violence I’d suggest picking up a copy of Vampire Hunter D Vol 2: Raiser of Gales by Hideyuki Kikuchi.