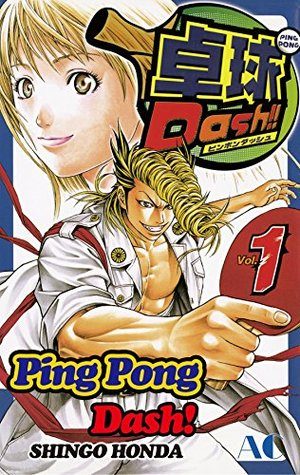 
So. Sports manga. It’s a genre I’ve only recently began reading in earnest, and I have to say that I’m now a fan. Ping Pong Dash! Vol 1 by Shingo Honda is part sports manga and part contemporary school manga. It’s the story of a Yankee who winds up joining the tennis club and includes great ping pong matches, memorable main characters, and fight scenes. There’s a lot packed into this volume, and a lot to enjoy, so lets take a look at the first volume in this manga series. The story is about Haruku Tendo, a Yankee who winds up joining the ping pong club.

There are several aspects this manga has that aren’t always as readily seen in other, similar titles. The first is how the fighting between school gangs plays out. Haruku’s gang is being targeted by a bigger, very dangerous gang. But with Haruku so focused on improving his ping pong skills in order to join the club his friends decide to face this threat by themselves and support their leader in his newfound endevour.

While Ping Pong Dash may come off as run of the mill sports/school life manga, there are several aspects that are used extremely well. The story grips the reader right from the first few pages where we see Haruku, the main character, driving down the road on an utterly ridiculous looking bicycle as he returns from Tokyo. It’s a wonderfully ridiculous image, drawn with all of the heart and fervor as anything found in a sports manga, and I was utterly hooked from page one. Much of the manga is the same. It might seem like something you’ve read before, but then it surprises you in all of the best ways.

Having delinquents and school gangs as main characters in manga is certainly nothing new, but in Ping Pong Dash it feels more real. All too often we hear about how a character isn’t someone to mess with or is dangerous, yet the stakes never truly support the sometimes exaggerated ways people speak of these characters. Here, this isn’t the case. Haruku’s rival gang is dangerous. I can’t remember the last manga I read where a rival group sent multiple people to the hospital. This isn’t a friendly rivalry or just some kids getting a fistfight. These are real grudges, real fights, and they have borne consequences that include doing time.

The relationship (or non-relationship) between Haruku and Sawa is also something that appears run of the mill on the surface but is more nuanced beneath the surface. The two main character’s first interactions give off the appearance of a classic scenario – the male lead falls for the female lead despite her having over the top reactions to things she’s misinterpreted in the first place. But reasoning is given to this attraction, reasoning that makes sense. It’s Sawa’s tenacity, fervor, and love of ping pong that he finds attractive. More than just wanting to join a club to get her attention, he wants to join, do well, and meet her where she’s at. That’s not something I’ve seen very often in manga series, and I really appreciated this approach. Haruku, despite being a troublemaker, really respects Sawa, ping pong, and the club.

Haruku’s group of friends and followers were also treated with much more character and humanity than is often seen. They all feel like real people, each with their own set of values. How far they’re willing to go to defend and shield Haruku from current goings on differs from character to character. No matter their personal opinions on the situation, they all have each other’s back, Haruku’s back, and come up with various plans to difuse and counter situations on their own – something else that isn’t shown as often as it maybe could be. It isn’t just the leader of the gang who is making decisions. The rest of the supporting cast shows their worth as well.

One aspect I have conflicting feelings about was the amount and type of editors notes in the text. Usually these are included with cultural or linguistic facts that might not be apparent to English speaking readers and will help the reader have a fuller comprehension of the more subtle subtext of a scene. Here, these notes were prolific and not always included where expects. Notes on things such as what a Yankee is were appreciated and well placed. Others were included that made less sense, explaining turns of phrase that, while a bit on the old fashioned side, are far from unknown in English. The line between helpful information blurs a bit here and possibly drifts toward over explanation, and I think certain readers might find this aggravating. Even so, things such as currency rates explained or distances between cities is always incredibly helpful.

The art was wonderful. Thick, bold lines are used in many panels, making characters and their actions really stand out. Ping pong matches are whirlwinds of movement. The paddle moving through the air, the rush of the wind, even the location of some sound effects move give off this feeling of frantic movement, making you want to keep reading and keep turning the page.

In all, this was a solid manga, one I enjoyed and would read more of. Despite seeming as if it will go down familiar paths, the story takes twists and turns, bringing to light narrative aspects that aren’t often seen in similar series. If you enj0y manga in school settings, sports manga, or manga featuring school gangs or Yankees you’ll want to pick up Ping Pong Dash! Vol 1 by Shingo Honda and give it a read.