Review – The Book of Hidden Things by Francesco Dimitri 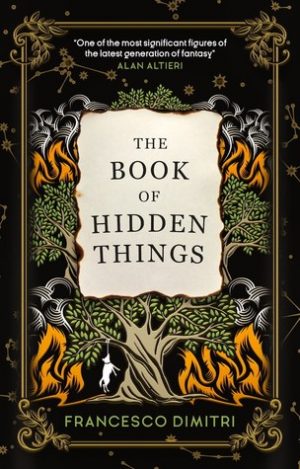 The Book of Hidden Things
By: Francesco Dimitri
Release Date: June 19, 2018
Publisher: Titan Books
Received From: Publisher
(All reviews are our own, honest opinions.)
Rating:


Ladies and gentlemen, let us talk about The Book of Hidden Things by Francesco Dimitri. I’ve sat on this review for a while. I wasn’t sure how I felt right after finishing this novel. The characters were unlikeable, I was angry with some of their actions and decisions, and there was at once not enough and too much magic. Yet I found the story still in my head, leaving me thinking about it days and then weeks later. It is this, I think, that hallmarks a good story, and maybe more importantly than that, a story that makes you think and question even if you’re not positive what it is you should really be questioning.

Fabio, Tony, Mauro, and Art have been friends since early childhood. Even though they’ve spread out across the globe they still gather once a year in their hometown for a night of pizza and booze and reminiscing. This year, Art doesn’t show. The book is told from first person point of view from three different viewpoints – Fabio, Tony, and Mauro – as they search for their missing friend. Art has touched all of their lives in meaningful ways and left a very real mark on all of them. Yet, despite this and their closeness all three have very different viewpoints on the situation and what they should and should not do. This push and pull between deep friendship and brotherhood contrasted with a very tense situation was fascinating to watch. There is a constant, nagging question of how far is too far and what is too much? What lengths are they really willing to go and just how much compromising – with each other and internally – can they take.

Transitions from one viewpoint to another felt very organic and flowed beautifully. The language used is also very beautiful. It truly feels like you’re on the Italian peninsula in a small, insulated town. The countryside is beautiful, nostalgic in a way even if you’ve never been there. But it’s also claustrophobic, too small, too close knit, with too many secrets and unsaid things. It’s something that drove all four boys out, but it’s also what drew them back in.

The characters aren’t necessarily likeable ones. Their lives and personalities tend to range between a bit of a hot mess and absolute dumpster fire. And while most are unlikable they are very interesting to read about. They’re the sort of characters that you can’t help but watch, even when you dislike them. If you like stories about unlikable people or complex characters The Book of Hidden Things most definitely has you covered. That said, if stories that lack a clear cut ‘good guy here, root for this one’ sign aren’t really your thing do be warned.

A host of secondary characters weave in and out of the tale. They are the sort of familiar people who have lived in the town their whole lives, always present, always on the verge of major events, sometimes almost a part of the scenery. They, too, are largely flawed people. The characters, even ones we only see for a few pages, all feel very real and complex.

There are certain scenes that stuck with me. Some of these were because they were just so very good. Other times they were because they I found some issues with them. Certain things felt just so unrealistic. Even though they are friends, sometimes that bond didn’t feel strained enough. Things that would cause definitive breaks in real life didn’t always have much of a consequence at all in the book, which felt a bit odd.

There are certain things not all readers will enjoy or want to read about. Bad things happen to pets, namely dogs, which is something a lot readers I know personally just can’t read about. If you, too, don’t like bad things happening to pets do be warned going into this.

Magic is in this book, but in more subtle ways as times. It takes a bit to get to that point. Magic isn’t prevalent from the get-go aside from the gorgeous, sweeping Italian landscape. But it is there. There are moments, very tense moments, where both reader and narrator question everything – about the story, about Art, and about the things Art has written about. And, just when you’re sure you have a handle on it, positive that you have the right answer, so very certain the book as finally drawn a definitive line everything is thrown into question once more.

In all, I enjoyed The Book of Hidden Things by Francesco Dimitri. It’s the sort of book that pulls you in and consumes you, almost against your will. I would be very interested in reading more of the author’s works.