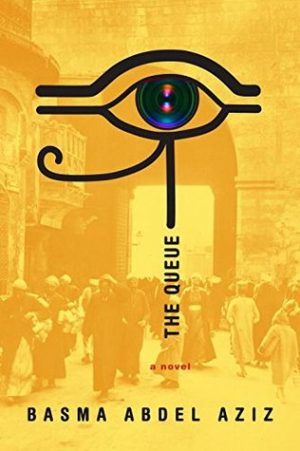 The Queue
By: Basma Abdel Aziz
Release Date: May 24, 2016
Publisher: Melville House
Received From: Publisher
(All reviews are our own, honest opinions.)
Rating:


One of the best books I’ve read so far this year is The Queue by Basma Abdel Aziz. This is a dystopian novel set in a nameless country in what is supposed to be somewhere in the middle east. The prose is utterly beautiful, a testament to both author and translator. And the story sucks the reader in right from the beginning.

Our main character, along with the majority of the supporting cast, are waiting at The Gate, a mysterious structure appearing virtually overnight. On the other side is the government along with all of the necessary paperwork and approvals to get everything from surgery to citizenship. While The Gate is currently closed, it will open soon. They promise. And so a queue forms in front of it filled with people waiting endlessly for something they are promised will one day come.

The main character is man who has been hit by a bullet, now lodged inside of him and slowly killing him. Only surgery will save him, but no one will operate without approval from the government. As the novel progresses, people’s lives become perpetually waiting at the Gate. Hundreds, then thousands line up as around them society continues to wither, the government’s reports conflict with events characters have seen occur with their own eyes, and people struggle to survive.

The book itself isn’t very long, being comprable in size to something like Brave New World or a novella rather than a full several hundred page novel. However, the text can be a little dense. A lot is happening within the pages, and a lot of characters weave their way through the narrative. I didn’t get through this as quickly as I expected, and its worth it to take the time to really savor this story. The first half of the book did have the tendency to feel a bit long, with characters introduced in very rapid succession. However, chapters are rather short which does make reading a bit easier.

The second half of the book focuses more on the characters. By this point, the situation is already set and stagnant. This means two things, world building isn’t quite as heavy as in earlier chapters, and the characters are largely more pro-active, doing whatever they can to alleviate their situation. Or, as some of them do, succumb to the pressures of their situation, changing themselves since they can’t change the world.