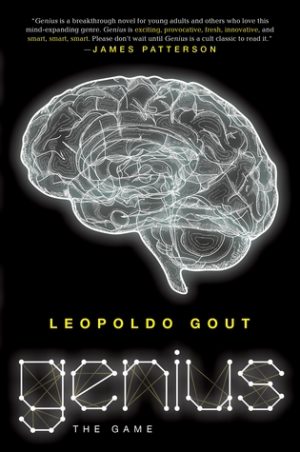 Genius: The Game
By: Leopoldo Gout
Website: http://www.ghostradio.com
Release Date: May 3, 2016
Publisher: Feiwel & Friends
Received From: Publisher
(All reviews are our own, honest opinions.)
Rating:


Genius: The Game by Leopoldo Gout is a young adult story with a tech/sci-fi feel. The story centers around a game designed by a young, wealthy CEO who invites 200 child and teen geniuses to participate. The prize? Access to one of the world’s largest supercomputers, which is exactly what Rex, one of the main protagonists, needs to get his hands on in order to find his missing brother.[/dropcap type=secondary]

The stories point of view is from the first person and switches between the three main characters – Rex, Tunde, and Cai. Transitions between one character and another were very smooth with no questions as to who was speaking at any given time. Each character was interesting and memorable, and you wanted to root for them right from the beginning.

The pacing is pretty fast. We skip from character to character and, sometimes, country to country, with ease. There’s little downtime, the pacing keeping up until almost the very end. While the story has a satisfying ending, this is most definitely the first book in a series. Questions remain unanswered, and more mysteries are opened.

A good number of graphics and pictures are included in the book. However, because I read an arc, I largely can’t speak to these as the majority weren’t yet within the text. What was there did seem to support the narrative. It would be interesting to read the finished copy and see what was included graphics-wise.

Genius: The Game was a fun story with memorable characters great for anyone who likes fast paced young adult novels.