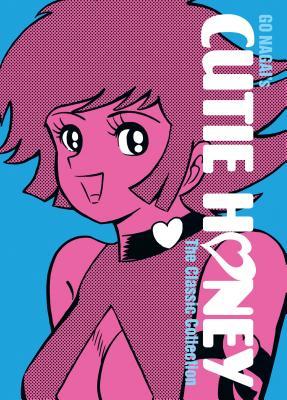 
I have long loved classic manga and anime. When a new edition of an older manga comes out you can bet that I am first in line for a copy. Obviously, I jumped on the chance to read Cutie Honey: The Classic Collection by Go Nagai. Cutie Honey is a lot of things. In one sense it’s a magical girl manga. In another it’s a sci-fi manga. It’s a mystery story. There’s violence, nudity, and sexual themes. And I loved every second of it.

Professor Kisaragi is the creator of an android he’s raised as his own daughter. When Honey Kisaragi finds out that her father has been murdered she swears revenge. In addition to attending the all-girls school her father enrolled her in, Honey now has to fight Panther Claw, the evil organization responsible for her father’s death.

Cutie Honey touches a lot of themes, balancing them extremely well. It is a revenge story, the tale of a teenager bent on vengeance for her father. It is a science fiction story filled with androids, gadgets, and villains who’ll do anything to gain Professor Kisaragi’s knowledge. It is also a magical girl story. Kisaragi Honey has the ability to change into several forms. When she does this in order to fight Panther Claw she is known as Cutie Honey.

The series is action packed. Cutie Honey can more than hold her own against all manner of villains Panther Claw sends her way. Yet, raw fighting power isn’t her only strength. Honey’s cleverness shines through as well, particularly when dealing with bullies and various issues at school.

There is a good deal of violence and sexual content in here. If you’ve read some of Go Nagai’s other works – Devilman for instance – this won’t be much of a surprise. There are some sexual situations and characters are often depicted naked. While Honey is changing forms she’s momentarily naked, and quite understandably so. Yet, this nakedness isn’t always portrayed in a sexual manner. It’s portrayed as very normal. There isn’t anything overtly sexual in circumstances such as Honey showering, etc, despite it being quite easy to use these scenes as nothing more than fan service. That said, there is sexual content in here, most often played for laughs.

As the manga is originally from the 1970s the art may not be what all readers expect. It is more ‘cartoonish’ at times than others, but magnificent nonetheless. Characters are drawn with incredibly distinct, extremely memorable designs. I really enjoy Go Nagai’s art, perhaps because it is so very different than much of what we see today.

Alas, the story remains unfinished. Such is the fate of serialized manga sometimes. Yet, enough of the story is told to feel satisfactory. Many incarnations of Cutie Honey have been released over the years including various manga, anime series, and movies. If you want other variations on the story or a more thorough conclusion, I’d suggest checking out some of these.

I would absolutely recommend picking up a copy of Cutie Honey: The Classic Collection by Go Nagai. It is a great story with very memorable characters. This all-inclusive hardcover edition is gorgeous, if a little more expensive than some other manga, and absolutely worth the price.