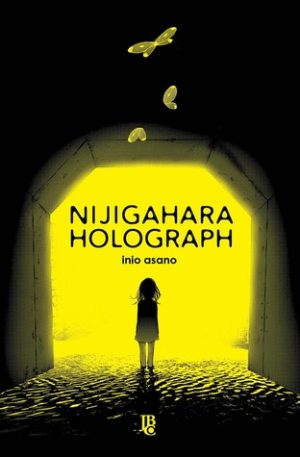 
Nijigahara Holograph by Inio Asano, the creator of the award winning Solanin, is a standalone 300 page manga, and perfect for those who aren’t looking to get into yet another long-running series. The story is one involving alternate timelines, violence, and the surreal. There are frightened whispers among the children about a monster that lives in the tunnel behind the school. The usually beautiful butterflies hold an almost ominous presence, suddenly being found everywhere. The lives of the students and teachers are interwoven in ways unforeseen on the surface, ways that aren’t always visible or expected.

This is a manga about a lot of things. It is about victims and their aggressors. It is about the ways our lives are inextricably interwoven, and how we don’t always see this in the moment. It is about how people change, and, perhaps more importantly, how they don’t change at all.

If you are looking for a manga that leaves you with a warm, happy feelings, this isn’t it. Nijigahara Holograph is a story that goes to dark places and shows bad things happening to good people. It is a story that hits hard. It is also a story featuring diverging timelines, shifting realities, and may require more than one read through to properly digest. A lot is packed into these pages, and its worth a slow read-through.

The story takes place in one town, following character’s from middle school into adulthood. This is further split into two separate timelines, something that could possibly be difficult to catch immediately. Character’s lives weave in and out from one another as they move away, return to their hometown, and meet again later in life. Some recognize one another. Other’s never do, despite close ties in the past and being a strong influence on one another once upon a time.

Bad things happen to a great number of the characters. Most of them, really. These are dark things – violence and trauma that leave everlasting marks upon the characters. There are murders, abuse, sexual violence … the list goes on. Some don’t walk away from these events at all. Whether it be abuse or murder, events are relayed rather matter-of-factly, and characters carry on – not unaffected, but, at times, less changed than we’d assume they would be. To an extent, people doing bad things is normal, something that anyone is capable of, even if we think otherwise.

Those who aren’t familiar with some of the symbolism used in manga and Japanese storytelling may be at a disadvantage. There are sections that feature the surreal and the inexplicable, but make more sense when taking symbolism, such as the multitudes of butterflies into account.

I’m inevitably will reread this manga at some point. I can’t help but feel as if more story elements will come together once the intricate relationships between characters were all known and the skeletons in closets revealed. If you are looking for a self-contained manga on the darker side of the spectrum, I’d suggest giving Nijigahara Holograph by Inio Asano a read.