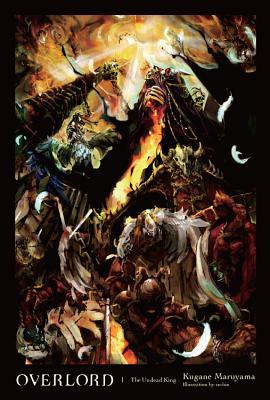 
When I saw Overlord, Vol 1: The Undead King by Kugane Maruyama sitting on the shelf at the book store I just had to have it. I couldn’t help myself. It isn’t every day you find a translated light novel with breathtaking artwork (and hardcover no less!) just sitting around in the wild like that. Not unless you’re at a specialty book store. Sure, they have manga most of the time, but they’re usually usually way in the back and resigned to only one shelf, two if you’re lucky. And even they usually only have the old standards.

Okay, so, first. For those who don’t know, light novel is a term for a Japanese novel which is more or less the length of a long novella or a short novel, and is almost always part of a series. Overlord is one of these. This is the first volume, and, as of the time of writing this review, the only one currently available in English.

The story follows the general isekai theme but with several twists. Momonga, our hero, is one of the last people logged into Yggdrasil the night of the server shut down. But when the server goes offline he, the rest of the NPC’s in his guild, and the physical guild headquarters itself are transported to … Well, Momonga isn’t sure. It sure isn’t the in-game world of Yggdrasil and the townspeople nearby seem to have no idea where or what that place is. This is the story of Momonga and his previously non-sentient NPC followers as they try to survive in an unknown world, find other Yggdrasil players who may also be stuck here, and, just maybe, find a way home.

There is a lot I love about this book. Momonga isn’t your stereotypical hero. The character he played was an undead lych king. He isn’t really human anymore, and quickly begins loosing sensation of things such as human emotion and human morals. For all purposes he now is a lych king. Of course this makes it a bit difficult to make contact with the locals and not have them terrified out of their mind when they see an undead warrior with his monster-like minions coming towards them.

The Tomb of Nazarick is a very interesting guild base populated with a huge number of now sentient NPCs. These characters are all on the darker side of the fantasy species spectrum. There are dark elves, vampires, and many who are on the more frightening end of the monster spectrum. All have very varied personalities. Each NPC was originally created by Momonga’s fellow guild mates, people who are no longer present but whose marks have been left forever on Momonga, the NPCs, and the Tomb of Nazarick itself.

The art. The art is gorgeous. Fully color pages are sprinkled throughout the novel. They aren’t they stereotypical anime art either. Everything is in a very beautiful almost watercolor like style. The last several pages have more art along with stats for the main character and other important characters.

The book’s pacing can be on the slow side at times. The book starts out well with fairly quick pacing. The first third of the story touches on a lot of interesting concepts, some of which aren’t always handled or talked about in your typical isekai light novel. The next third was a bit on the slow side. However, the pacing picked up again in the latter third of the light novel with some very exciting scenes. The interactions between the Tomb of Nazarick and the local village are very interesting, proving to be a really interesting plot point with some great fight scenes.

Now, I did watch the anime, also titled Overlord, so I more or less knew how the story was going to progress. But the ending still made me curious. It still made me want to go pick up the next book and keep reading. If the next book carries the same momentum that the last third of Overlord: Vol 1 did, it will prove to be a truly stand out, excellent sequel to a strong first novel in the series.