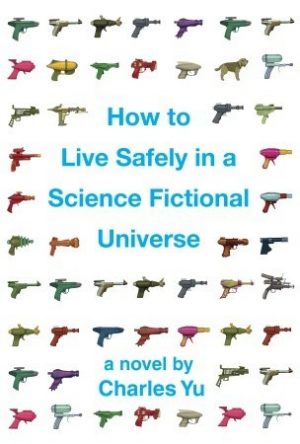 I always enjoy a story involving time travel. I like that the repairmen know that the past cannot be changed, and act at almost in a bartender fashion for the poor souls who find out firsthand that their worst memories and regrets really cannot be changed after all. It feels real, raw at times, and very human.

I also like the universe it’s set in. Things are science fictional. All universes are this way. We have a universe with the Death Star and young Skywalker’s running about needing their time machine repaired. It’s a fascinating concept the book teases us with. Ultimately, though, it has little effect on the story itself other than providing a great setting, a great title, light humor, and some rather interesting philosophizing points.

The main character was likable. I liked the pet dog which wasn’t really there. I liked the time machine’s AI. But there were very few ‘real’ characters. The majority of the book is just the main character speaking to himself, or the main character watching scenes from his past unfold as he travels through time. We meet the occasional minor character as the story moves along, but most are simply used for the main character to get from point A to point B and are never seen again. Having so few characters works for the narrative. However, I can see some readers getting a bit frustrated by this as there is a quite a bit of Charles Yu (the character) talking to himself, working out philosophical topics in his head, or speaking to something or someone who may not be as real as we the reader initially believed.

The second half of the book focuses largely on the main character’s relationship with his father, a time machine inventor who went missing many years ago, and the struggle to find him. At times very real, and poignant, it was a good story in and of itself.

The world building in the first half was largely forgotten or ignored after the halfway marker. We never really got to see much of this science fictional universe. In fact, the world the main character grew up in was so mundane, normal to our non-science fictional eye, that it honestly began to break suspension of disbelief for me. There was no mention of interstellar travel when the main character and his father were working on his time machine. There was no dimension breaking of cities disappearing and appearing in the middle of other cities. There was no sign that the people of that world knew of a science fictional universe at all. Most importantly, constant flashbacks grew tiring. The second half of the book simply fell flat for me.

Do I recommend reading How to Live Safely in a Science Fictional Universe? Yes. I do. The book does exactly what all speculative fiction is supposed to do – it speculated. Some interesting ideas are brought up, and the book has a rather likable protagonist. However, I don’t think this book is for everyone, and I did, ultimately, wind up giving it fewer stars than I had originally thought.