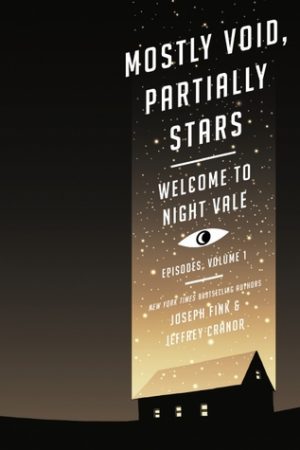 
Mostly Void, Partially Stars, written by Joseph Fink and Jeffery Cranor, is the first volume in a series of a books featuring episodes of the podcast Welcome to Night Vale. Two volumes have been released thus far, the second being titled The Great Glowing Coils of the Universe. A must-have for fans of the podcast, this book contains the complete transcripts of the first 25 episodes of the Welcome to Night Vale along with one of the live shows, Apartments, a particularly excellent episode and one which I wish I’d known about earlier. Before each chapter is a small section by one of the creators or a member of the cast talking about that specific episode or the show in general, and some wonderful illustrations by Jessica Hayworth.

Night Vale is a small town set somewhere in the American Southwest. It’s a perfect little dystopia – the secret police keep an eye on things, and every conspiracy theory is true here. Monsters and frightening foes abound, sometimes attacking, sometimes running the local school council. People go about their daily business as normal, because for them this is normal. The town is filled with a very memorable cast – Old Woman Josie and her angel friends, Carlos the Scientist, and, of course, Cecil Palmer. Each podcast is an episode of Cecil’s local radio show, where he narrates the goings on, investigates the new odd happenings, and generally gushes about Carlos, the new scientist in town with perfect hair. If you’re looking for an amazing, sometimes funny, sometimes poignant science fictional romp, this is it.

As interesting and exciting the weird goings on and life threatening issues that must be solved each episode are, Welcome to Night Vale is most memorable in its writing. Nowhere is this better highlighted than within this book. Fink and Cranor have painted a very vivid, very colorfully world that is Night Vale. But it isn’t just the memorable character, bizarre happenings of the town, or the terrifying monsters that need to be corralled that make this interesting. There are very real, very beautiful moments in the writing – moments of universal truths, of poignancy, of things that stay with you long after you stop reading (or listening). Having these episodes in print allows us to linger here, admiring the beauty of the prose and meaning of the words. Not only that, but I caught more of the small lines tucked into larger stories that are humorous and often slightly terrifying which I missed on first (and second) listens to the podcast.

On the other hand, something is a little lost when in literary format. We loose the weather segment, of course, always portrayed in the podcast by a song, usually from an indie artist. In the book, the song and artist are listed, but, of course, cannot be listened to as originally intended. We also do not get the wonderful narration of Cecil Baldwin who brings each episode brilliantly to life. If you do read this book and haven’t heard the podcast at all, I highly recommend giving at least one episode a listen as Baldwin’s narration is truly something special.

Now, it is important to reiterate that Mostly Void, Partially Stars is first and foremost a collection of the podcast’s transcripts. Largely, we get nothing new. There is the live show transcript, which is wonderful to have, along with one to two page insights from the authors and cast. This little snippets are wonderful in their own right, providing insight into the minds of the creators. By and large, there isn’t much new content. Then again, there doesn’t have to be. Mostly Void, Partially Stars is upfront about what is and gives readers exactly that.

As for the format itself, the book is written in more or less a familiar chapter-like style. Some sections do have a bit of a play-like format where two or more characters are depicted speaking together. However, most episodes are from one point of view only, so if you dislike play formatting, never fear.

If you haven’t gotten into Welcome to Night Vale yet and want to, this is a perfect place to start, especially if you are a fast reader. Not only do you get the transcripts of 25 episodes, but you get all sorts of other goodies too. If you like science fiction, dystopias, weird fiction, and generally awesome stories, grab a copy of Mostly Void, Partially Stars. You definitely won’t regret it.