Review – Doctor Who: The American Adventures 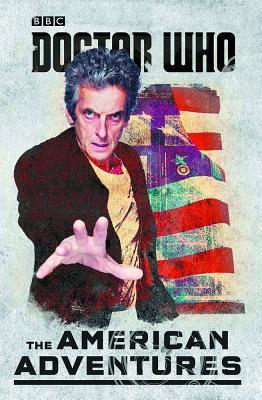 
It’s been quite some time since Doctor Who has aired. The Christmas Special is still several weeks off. I’ve been completely Doctor Who starved these last months. But never fear! There’s something to tide us over until Christmas. Doctor Who: The American Adventures released on October 25, 2016.

The book itself is a collection of short stories about the Doctor, all of which are set in America during various time periods and historical events. It is not immediately obvious who the author is. There is only one place where the work is properly attributed to its author: a small line on the copyright page which reads ‘Written by Justin Richards’. I found the lack of obvious inclusion of the author a bit odd. The author wasn’t listed on the cover or title page, and was difficult to find for no discernible reason.

Something to note is that this book is aimed at middle grade readers, specifically children 9 to 12 years of age. This, again, may not be immediately obvious to all readers when first picking up the book, and can leave people guessing as to dialogue and style choices when reading. The title page is headed with the title ‘BBC Children’s Books’, though, and the book does bare the Puffin logo. (Puffin being the children’s imprint of Penguin. Again, while present, this may not be immediately obvious to casual readers).

This wasn’t my first Doctor Who novel. I’ve read several in the past. All were aimed at adults, though, and none were anthologies such as this one. There are a total of six short stories within the book. All are set in America during various times such as The Oregon Trail to World War II to modern times – a good range of times and places with something for everyone.

The first story, “All That Glitters”, is set during the California gold rush. This is, by far, the weakest of the stories. The two characters we are first introduced to, Josh and Jesse, aren’t particularly interesting, and the plot isn’t quite as exciting as other stories. Another, larger issue is that the Doctor is rather lackluster. All personality is inexplicably missing.

This is an issue which does permeate all of the short stories found within this book. While the character is definitely identifiable as The Doctor, he lacks further personality. Were it not for the twelfth Doctor pictured on the cover I would have really struggled to identify which Doctor was being presented. Now, while the Doctor is supposed to be able to change – actors, personalities, etc. – and still remain decidedly him, the character feels rather flat without the more readily identifiable personality traits of one distinct incarnation of the Doctor or another.

The stories do improve as the book goes on. New characters are, largely, more memorable. The stories are also much more reminiscent of the more typical middle of the season standalone stories found in any season of Doctor Who (since the 2005 reboot, at least). The last story, “Base of Operations”, probably felt the most Whovian both in story and character out of the entire bunch.

While there are some issues presented within Doctor Who: The American Adventures, the book was still an enjoyable read overall. It’s short, quick, fun, and appeals to a wide range of ages. If you are a fan of Doctor Who, of if you know someone between 9 and 12 who is a fan of Doctor Who, you might want to pick up a copy and give it a read.