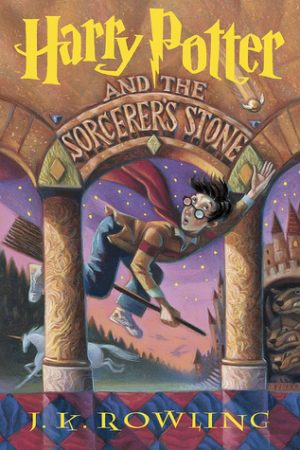 
I haven’t reread Harry Potter and the Sorcerer’s Stone since middle school, probably. My little paperback is beaten up now, passed along to my siblings before being returned significantly more worn than the last I’d seen it. Pages are missing along with the back cover. The spine is split in two. Small, triangular holes line a few of the pages where my parrot sat and gnawed on the book as I read. A giant sticker, one of those large, badge-like ones they give out at doctor’s offices, is tucked between the pages, buried near the end of the book where it was once used as a bookmark.

I can’t help but smile as I look at the book, and I wondered how unbiased of a review I could truly make this. The nostalgia factor is alive and well with this one, after all. I read the first book when I was 11, and the last book was released the summer I graduated high school. Harry Potter bookended my childhood. But, I’ve tried my best to maintain an open, unbiased opinion. Here goes!

Harry Potter and the Sorcerer’s Stone deserves all the praise it has received. There is something decidedly magic about it. As Harry is introduced to a new, impossible world, so are we. The characters, especially the adults, all feel otherworldly. There is a distinct air of otherworldliness about Hagrid, Dumbledore, and the rest. Yet, they feel human, too, with just enough personality and motivation to avoid feeling too ‘other’. The setting is filled with delightful absurdities – pictures that move, food that appears and disappears off the tables. And, seeing all of this through the eyes of a very young Harry, the only way to describe Hogwarts, his new home, is ‘like magic’.

Reading this book as an adult, it was easier to see just how awful the Dursley’s were. Even as a child I was able to look and say ‘look how mean they are’. But this goes past that. The Dursley’s are truly horrible people who treated Harry incredibly awfully. No wonder McGonagall was so horrified when Dumbledore informed her they were leaving Harry with the family. I’m not going to say this was suspension of disbelief breaking – things at the Dursley’s aren’t as bad here as they are in subsequent books – but it was a bit shocking rereading the first few chapters as an adult.

Something that I really must praise the book on is its conciseness. Harry Potter and the Sorcerer’s Stone sits decidedly within middle grade literature – the character’s the correct age, its marketed as a children’s book, etc. – whereas some of the later books definitely appeal more to an older audience. This tightness of the prose and the speed and ease which we flow through the story is impressive and something which, I feel, is lost, at times, within the later books of the series. Lee Jordan’s Quiddich commentary isn’t just funny, it speeds through sections which could easily grow long and really captures the feel of a match. We are shown just enough time in classes to understand how magic works within the Harry Potter universe and meet all of Harry’s teachers and fellow classmates without becoming bogged down in Harry’s more mundane day to day life.

The characters are wonderful too. Harry is relatable, as are Ron and Hermione, though perhaps in different aspects. Their Hogwarts classmates are all charming and memorable. The teachers are, at once, mysterious and magical, but also have a certain warmth about them. Characters we are supposed to dislike or be frightened of do just that without every really falling into caricatures of villainy.

It is easier to see now how this first book sets up for other. Asides and comments that come off as interesting or amusing are clear references to backstory, lore, and ideas that are fleshed out in detail later in the series. Something else touched upon though never to the extent which this occurs in later books, is that a lot of misconceptions and dangerous occurrences seem to occur because the adults refuse to tell Harry something. This time it is innocuous enough. Hagrid doesn’t tell Harry why Snape seems to hate him, and I can understand Hagrid’s feelings. He’s already had to tell Harry a lot of things which he shouldn’t have been counted on to do (relating the death of his parents, his wizard status, Hogwarts, etc.) and this was one step too far into matters he felt weren’t his. On the other hand, this was enough added suspicion for Harry to push Snape from the horrible person bin to the probable villain bin. And again, it’s easy to understand why.

But this lack of information giving works in this book, where it can be merely frustrating in others. Even had this bit of information been related, who would ever suspect poor, terrified Professor Quirrell to be host to the most dangerous wizard that ever lived?

Harry Potter and the Sorcerer’s Stone is a classic. It’s a book that won’t let go after you read it. It stays with you, sits and lingers and doesn’t let you forget it. This is a book worth reading, no matter your age. It’s a place where magic is real, and, maybe most importantly, love will always conquer all.