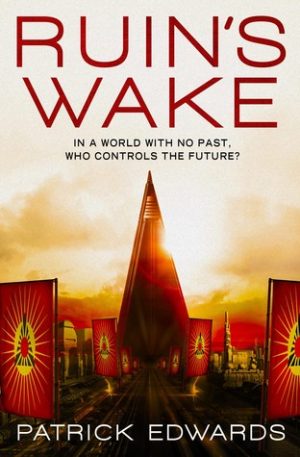 
A wonderful debut novel, Ruin’s Wake by Patrick Edwards draws the reader into the story immediately. The tale is one of love, revenge, discovery, and individuality set in a world dragging itself out of ruin. The story is set on earth sometime in the far future about 500 years after something called The Ruin, a cataclysmic event which wiped out current civilization. Knowledge was lost, but humanity survived. From the ashes a totalitarian government rose. This is the story of three people trying to survive in this world and save the things most dear to them.

The narrative follows three characters with each chapter following a different perspective. Cale is an old soldier living alone in a remote location. But when he receives word that his estranged son has been greviously wounded, Cale immediately sets out on a quest to get his son out of the sanitorium he’s being held in. Kelbee is a young woman in an abusive marriage who falls in love with someone else. Not only is she having an affair, but an affair with an insurrectionist, something doubly dangerous when her husband is a government official. Professor Sulara Song is one of the few people studying the pre-Ruin world. What she finds on a dig could change could change everything.

Early chapters see each of these three characters following their own journey. The point of view changes chapter by chapter. Each character faces high stakes, though certainly of very different kinds. I enjoyed reading from each character’s point view. Their fears, hopes, and dreams all felt real. Unlike other characters of books in similar genres and facing the same sort of government, none of our main characters set out on a quest to save the world, take down the government, or some other grandiose plan. Motivations and goals are much more personal – save a son despite their differences, explore the pre-Ruin world even though no one else seems to care, and find love, comfort, and safety in a life where all of those are in short supply.

This makes Cale, Kelbee, and Sulara very relatable. They feel like real people with real concerns. It’s easy to sympathize with them. I was equally invested in all of their plights, always eager to follow a different character at the end of each chapter.

Eventually, their stories begin to intertwine. Despite being incredibly different tales, this occurs very naturally and believably. Tension and pacing both increase greatly within the last third of the book, propelling readers towards an exciting ending.

The world laid out before us is like our own in some ways, and vastly different in others. Technology has survived, but not all of it. History is largely lost, with everything before a certain date little more than legend. A totalitarian govern rules with an iron fist above it all. Individuality and individual thought is gone – at least as far as the state is concerned. Yet, these prevail, as they always do, hidden behind walls of anxiety and fear.

Ruin’s Wake is an amazing debut novel by Patrick Edwards. I am so happy I had a chance to read this and cannot wait to see what else Edwards may be in store for us in the future.