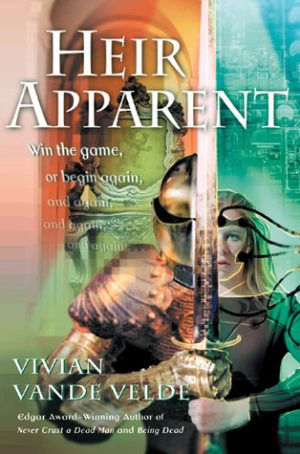 
Heir Apparent by Vivian Vande Velde is the story of fourteen-year-old Giannine who becomes trapped within a video game which shares the book’s title. I actually read this book when it was first released way back in 2002. I’d found it on the new release shelf in the library, brought it home, and absolutely loved it. Recently, I found a copy in a used book store and felt it was high time for a reread.

Something I didn’t know – either back when I was fourteen or when I picked the book up for the second time a few days ago – is that this is part of a trilogy. Why so surprised? It doesn’t actually say so anywhere on the cover or dust jacket that I could find. But, according to Goodreads, this is, in fact, the second book of a trilogy about the Rasmussem Corporation. Each book has a separate protagonist, though, and they can be read as standalone novels.

Heir Apparent is told in the first person perspective of Giannine Bellisario who uses a gift certificate she received for her fourteenth birthday for a day at Rasmussem Gaming Center. The fifty dollars from her father will get her 45 tolkens for the regular arcade or a half an hour on a total immersion VR game. Obviously she picks the latter and starts up a game titled Heir Apparent. The group of semi peaceful protestors Giannine passed on her way in grow more restless and break into the facility while she’s in-game. The damaged equipment won’t allow the tech’s to simply shut the game down without causing lasting and potentially fatal damage to Giannine. The only way for her to safely leave the game is the old fashioned way – to beat it. Okay, no problem. Except that while Giannine likes video games, she doesn’t get to play them all that often and can’t seem to get past level 1.

This book does something that almost no other video game related book manages to truly capture. This really does feel like the main character is playing an RPG, particularly those from the 90s. Think franchises like Final Fantasy, ‘Tales of”, Star Ocean, and Chrono Trigger/Chrono Cross. This adds a very realistic feel to the book, and immediately appeal to linear RPG players.

The flags Giannine encounters – those seemingly innocuous character meetings and such that normally trigger things like cut-scenes and dialogue choices in real-world video games – really are the sort of encounters that would and do happen in games. The boy caught for poaching is one example of this, as is Giannine meeting the royal family, and, maybe most obviously, the very beginning of the game with her family. (Let’s face it, we’ve all missed quest lines because we left the starting area too quickly and didn’t do the fetch-quest that unlocks the super special item you need late game).

I like that Giannine fails. I like that she doesn’t know what she’s doing. This makes her a very approachable character, more so than main characters in similar books and anime. A video game genius Giannine is not. It’s easy to relate to her – especially when I was also fourteen, loved gaming, but only owned two or three games.

The VR tech feels logical without the novel every going very in-depth about the science behind it. So how does it work when it isn’t mentioned too much? World building. The world Giannine lives in is very clearly ahead of our own, especially when the novel was first released. The buses are all driven by an AI interface. There are hologram pets. There isn’t one or two VR games, but many of them. Single player, multiplayer, and many different genres and age categories exist. At no point do these VR gaming systems feel as if they are new tech.

Giannine getting stuck in the game has nothing to do with evil geniuses, issues with brand new software, or other tropes we’ve seen before. The protesters broke in and damaged expensive, state of the art equipment. It’s the mental overload that’s the problem, the information density, the remembering a life that isn’t yours. I also like that they have to keep these games short due to limitations and dangers to the human body, an aspect that isn’t always explored in other stories within the genre.

There is a bit of mixed media thrown into the book as well. We are given reports from Rasmussem Corporation regarding the protestors, the physical and mental state of Giannine, and the repairs to the equipment. These really added to the narrative, reminding the reader about the more physical and lasting damages that could befall Giannine at times when she is more concerned with things like dragon attacks. However, these do taper off near the end where, I feel, they were needed the most. It felt odd that the real-world danger we are reminded of every other chapter near the beginning wouldn’t be more prevalent near the end where the stakes are much higher.

Heir Apparent was a great read, bringing together elements of science fiction and fantasy, and perfect for fans of young adult and middle grade books. The first person narration and some great characters makes this a fun, quick read. This is a book well worth the picking up.