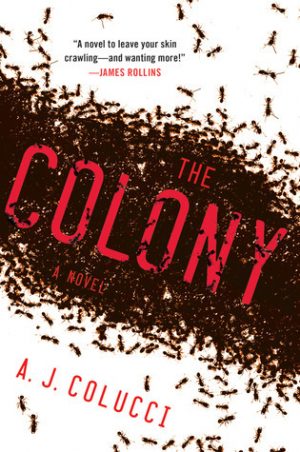 
Bodies are turning up in New York City. A teacher, two santitation workers, and an MTA employee all turn up dead, their bodies dissolved from the inside out. The culprit is a supercolony of ants of massive size. A.J Colucci’s debut novel The Colony is a science fiction horror novel that combines espionage and science in a memorable tale of true horror.

The mayor of New York City is desperate to keep the steadily mounting deaths under wraps. The last thing the city needs is widespread panic. The world’s greatest ant expert, Paul O’Keefe, is working without sleep, but Pulitzer Prize or not, his experiments are hitting a dead end. The ants are immense and like nothing he’s ever seen. Normal extermination methods don’t work, and the body count is steadily climbing. Brought in for consultation is fire ant expert Kendra Hart, Paul’s ex-wife. Together, they must bring the ant supercolony under control. Meanwhile, things get direr on the streets of the city and several federal government agencies begin to take notice of the situation.

The story shifts between both Kendra and Paul’s points of view, switching from one to the other as the story moves steadily forward. It is easy to see what drew the pair to one another, and just as easy to identify what drove them apart. Both Paul and Kendra are flawed, something both are willing enough to admit to. The pair feel incredibly human, each one a combination of infuriating and endearing traits. The messy separation doesn’t have quite the same clear cut villain-versus-victim tone other novels can take. Both are at fault for the dissolution of their marriage, and both must learn to work together and communicate in a way they never did while married. If they don’t, the consequences are dire, not just for them, but for the entirety of the human race.

What begins as a sort of mystery/thriller quickly evolves into something else. The decently paced mystery takes a turn for the horrific rather quickly. The super colony of ants isn’t just claiming a victim here or there. They are poised to do immense damage to the city, and that is exactly what begins to happen. We see the damage firsthand along with what the stress of the situation can do to people.

All the while, larger forces are at play. Paul and Kendra may be tasked with stopping the ants, but not everyone is willing to go along with their plan, and some don’t want the ants destroyed at all. More human enemies make themselves known, posing an entirely different sort of threat to Paul and Kendra. While the question of where the ants came from and why is easily solvable, how exactly it will play out and what the consequences will be aren’t quite so clear cut. What begins as a human vs. ant problem quickly becomes a much more tangled web with the threat of utter destruction hanging over us from page one right to the bitter end.

While our main characters are complex characters with believable personalities, not every character fits into the same mold. Several characters’ reasoning was nigh unfathomable, with the most extreme measures not being considered as last resorts but as the first option. However unreasonable certain character’s might have been, the story was still greatly entertaining and overall feel generally in line with any other horror book involving giant monsters.

The tense atmosphere ramps up towards the end of the book. The pacing runs at breakneck speed before coming to a rather sudden halt. The conclusion wraps up rather tidily, showing readers what happens to our main characters afterwards. The conclusion felt unrealistic and much too cleanly wrapped up, especially considering the circumstances.

Overall, The Colony by A.J. Colucci is sure to keep readers on their seats. Believable science and horror are masterfully combined to create a sense of true fear and keep readers coming back for more.