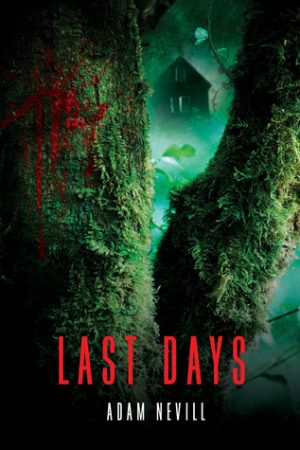 
A frightening tale of cults and the paranormal, Last Days by Adam Nevill is long, suspenseful read in the same documentary-styled vein as Blair Witch and won the 2013 British Fantasy Award for Best Horror Novel.

Kyle Freeman is a documentary maker down on his luck. But when he’s called to film a documentary on the famed cult The Temple of the Last Days, that luck seems to change. The few remaining members of the cult who didn’t commit mass suicide or disappear aren’t very big on talking. Things go from odd, to creepy, to downright frightening as it becomes clear that the inhuman creatures these people talk about might be more real than Kyle wants to believe.

Despite the documentary-like nature of the book, the story is told in traditional prose, not utilizing any alternative storytelling formats books such as The Themis Files by Sylvain Neuvel use in similar circumstances. The novel is a rather slowly paced one. Time is taken to fully see the scene from the documentarian’s eye. Things rarely go Kyle’s way, though. The odd happenings and skiddish interviewees get on his nerves more than frighten him.

The first two thirds are a genuinely creepy experience. The atmosphere shifting to one of cold dread and darkness is palpable, only compounded on by the strange and deadly cult at the center of the fictional documentary. Each location gets odder and more frightening the further they delve into the history—and downfall—of the cult.

Strange things happen to the characters. Ancient, terrifying objects begin to turn up. And on top of that, a host of horrifying cult activities

The ending of the novel changes in tone and pacing. Where the majority of the novel is a slow psychological horror, this section ramps up the action and pacing. A new character is introduced—a very shady mercenary hired as protection on this last leg of the journey. There are no interviews as before. This time the sole goal is to stop the events that have been so long in coming. While this was an interesting ending, the pacing went from a slow suspenseful horror novel to the breakneck speed of a thriller.

This intense change in pacing can give a reader a bit of whiplash, and was rather inconsistent with the rest of the book. Moreover, it wasn’t quite as frightening as the rest of the novel. The change of pace and tone meant that the fear of the unknown played second fiddle to a story more focused on revenge and putting this evil to rest once and for all. Everything felt as if it was a bit rushed—a bit odd considering the book is over 500 pages long.

In all, this was an enjoyable read. Last Days by Adam Nevill is a horror novel that keeps the suspense and scares coming.