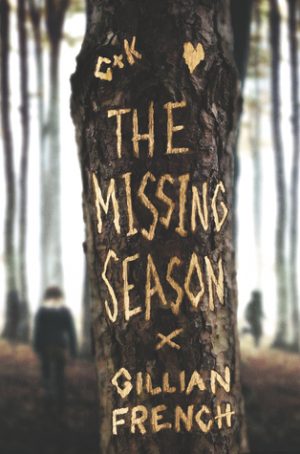 
Gillian French’s newest novel, The Missing Season, is a novel that straddles several genres—mystery, horror, and thriller. The author is no stranger to the genre, her novel Grit being nominated for an Edgar Award. This novel, too, is a great example of a young adult book that falls within that liminal space between thriller and horror.

The story is about Clara, the new girl in town. Starting school in a new place five weeks into the new school year is tough, but Clara makes friends with one of her neighbors and soon has a group of people to hang out with. But the town is eerily quiet, spooked by the disappearance of someone from their high school. And they weren’t the only one to go missing. Other teenagers have turned up dead in the past. While the adults look to the police for answers, Clara and her friends know better. It was the Mumbler, the monster that can be found out on the marshes.

There is a dark, tense atmosphere to this town that permeates the first half of this novel. It’s dark, suspenceful, and utterly creepy. The cold fall air in a quiet little town filled with woods and marshes is very palpable. Urban legends of a monster called the Mumbler abound, with kids leaving offerings and following whatever rumor they hear will keep Mumbler at bay.

Is the Mumbler real? Clara’s new friends certainly think so, giving the story an almost magical realism air. As the story progresses things go from creepy to dangerous. Another high school student goes missing. Events go from rumors, heresay, and the ghosts of past tragedies to terrible events Clara finds herself embroiled in. The danger becomes real, and the story more suspenseful and tense.

However, that incredibly suspenseful edge wears off a bit in the second half of the novel. Secondary plots begin to take over a little bit, overshadowing the previously dark and frightening air. Romance takes center stage for several chapters. While I really enjoyed this plot point and liked the character of Kinkaid, it did feel a bit out of place. Too much emphasis was put on this romance at times, consuming the plot even as other, potentially more important events were occurring.

Red herrings leading up to the end of the story were very heavy handed and rather obvious. The less focus on the urban legend aspect of the story, the more the book seemed to falter. Clara’s romance and wish to fit in with her classmates really took center stage around halfway through the novel, killing off the tension and suspense. Stakes weren’t risen until the very end of the novel, making the pacing feel very off-kilter.

French clearly has a very engaging writing style, and knows how to create a very suspenseful, tense atmosphere. The story really shines when it leans into the urban legends, creepy small town, and possibly paranormal. The Missing Season by Gillian French would be best loved by readers looking for a creepy read and enjoy leaning into some of the standard YA contemporary tropes and those looking for a quick, fun read.