MangaMonday Review – How to Train Your Devil, Vol. 1 by Tonchi Kataoka 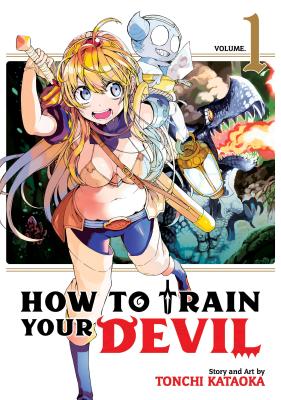 
Fan service is brought to truly yikes levels in How to Train Your Devil, Vol. 1 by Tonchi Kataoka. This 2019 release is set in a standard fantasy world but bears a twist—its set after the hero has defeated the Demon King. In this case, the current demon king is barely a toddler and the forces of good can’t justify dooming the infant to death. Instead, the hero, Zeno Zebia, is tasked with caring for the 114th Devil King.

Should the Devil King move too far away from the hero for too long of a time, he’ll die. Do enough good deeds, however, and the contract will be fulfilled—something both parties are extremely eager for. Things aren’t that simple, though. The Devil King isn’t exactly keen on doing good, and the hero wants nothing to do with him.

Evil forced to do good stories have always been a bit of a niche favorite of mine. Hilarious situations often ensue, and, sometimes, rather poignant moments are made on the nature of people or good versus evil (for example). This manga is not one of those times.

I commiserate our protagonist’s situation. The Devil King, though an infant, is a lecherous, horrid little creature. While this could have easily been played for laughs, it simply goes too far in its search for fan-service humor. The Devil King jumps straight over letch and directly to ‘Go Directly To Jail, Do Not Pass Go, Do Not Collect $200’ levels of antics.

Even so, Grull, the devil king, very gradually does grow and develop as a character. But alas, he is the least of the issues this manga has. Maid Ruby, the Devil King’s old maid, is an obsessed fan girl who wants to throw herself at the Devil King. Though meant for laughs, this turn of events was merely alarming and off-putting with the devil king being a literal toddler.

Worse was the tentacle scene. This wasn’t just distasteful. This was awful. Plant monster rape is just something I don’t want to read about, especially when it’s dressed up as humorous and fan-service laden. No thank you.

This is all rather distressing, not just for content but because the concept is truly an interesting one. The fantasy world is different enough to be interesting on its own. Having the story begin after the ending point in most fantasy tales is, again, something I’d very much like to see more of. Here, it is squandered, leaning much too heavily on fan service and worse.

While the hero and devil king did have interesting aspects to their characters, it was lost amid a sea of yikes. I can’t rightfully recommend reading How to Train Your Devil, Vol. 1 by Tonchi Kataoka.