Review – The Municipalists by Seth Fried 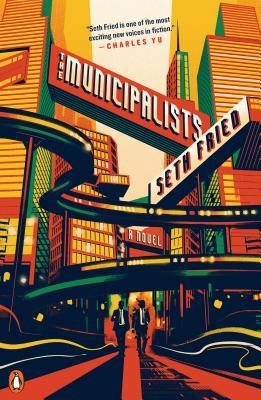 The Municipalists
By: Seth Fried
Release Date: March 19, 2019
Publisher: Penguin Books
Received From: Publisher
(All reviews are our own, honest opinions.)
Rating:


Seth Fried’s novel The Municipalists is a fun read featuring government officials, sentient AI, and a potential terroristic plot set in America’s biggest city. With a little bit of near future science fiction and a mystery to solve, there’s a bit of everything tucked away within these pages. Thematically, the story explores people, their relationship to newly emerging technologies, such as advanced AI, as well as the cities we’ve.

Our protagonist is Henry Thompson, an employee of the United States Municipal Survey. He’s a boring man whose only real hobby is trains, and isn’t well liked at work. When the agency is attacked, its Henry who’s chosen to quietly investigate the situation. Soon, Henry finds himself headed towards Metropolis, the quintessential great American city of tomorrow, along with a partner he wants no parts of—an AI in human form called OWEN.

Henry is a bit of a boring stick-in-the-mud—something he readily admits his coworkers say about him, and makes him unlikable in their eyes. As the story is written in first person, this novel might be a little bit difficult to get into at first for some readers. Henry might not be immediately likable, which can be off-putting despite the character development he later undergoes.

The audiobook version of the novel plays on Henry’s personality through the voice acting very well. Extremely well voice acted, it is even more apparent how boring of a character our protagonist is at the start. This is quite excellent storytelling! …and a potential turn-off for some readers. While reading or listening to a seemingly boring protagonist can be a turn off, Henry undergoes a lot of change and learns quite a bit through the course of his adventures, not least of all from OWEN.

OWEN is everything Henry is not—both good and bad. The AI is full of life and verve, with a sense of humor, a sense of fashion, opinions on everything, and a penchant for drinking regardless of the time of day. The pair may not get along as well as they could, especially at first, but both learn a great deal from the other. Their interactions are humorous, but heartwarming at times as well, making each scene with the pair of them a joy to read.

Plotting follows a familiar, well worn path into a near future that combines the old idea of the great American city with potential terrorists and the science of tomorrow. A combination of detective work, hi-jinks, and bad guys bent on destruction ensue. Yet, its more than that as well. There is a conversation tucked within the pages about people’s relationships to cities, to one another, and to the science and technology that’s currently emerging. Once it gets going, it’s a fun story well worth a read, though it can admittedly take a chapter or two to become fully invested in Henry.

In all, The Municipalists by Seth Fried was a book that, once it gets going, is quiet a fun story. For those interested in exploring more of Seth Fried’s work, the author has several short stories which have also been published. I’m interested to see what else this author might have in store for us in the future.