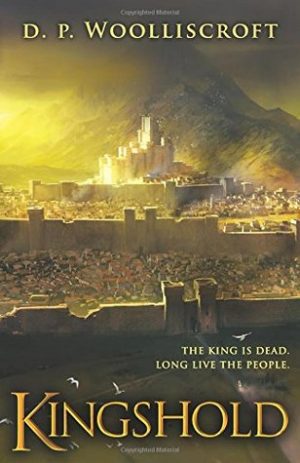 Kingshold
By: D. P. Woolliscroft
Release Date: 2018
Publisher: Self Published
Series: The Wildfire Cycle #1
Received From: Blog Tour
(All reviews are our own, honest opinions.)
Rating:


If you are looking for a perfect marriage of high fantasy and political fantasy, look no further. Kingshold by D. P. Wolliscroft is the first book in The Wildfire Cycle series which focuses on a very tumultuous time in any nation’s history, and one very underutilized within the genre. Jyuth, ancient wizard and a sort of protector of the kingdom, has disposed of the king and queen. After countless centuries and cycles of ineffective rule, Jyuth declares that now is a time of change. Now, the people will elect a Lord Protector. The time of kings—and Jyuth’s protection—is over. It is up to the people now. But no one knows what this change will bring, and not everyone agrees with the wizard’s latest machinations.

What ensues is a tale told over the span of about two weeks, outlining the time between the deposition of the old king and the election of the first Lord Protector. Several points of view are followed, with characters weaving in and out of one another’s lives. Connections are established between characters that aren’t always immediately obvious. Despite the size of the city and the many social castes and walks of life characters come from, there aren’t always as many degrees of separation as one might think.

Many different characters are introduced at the start of the book before their plotlines begin tangling together, building towards something much larger. While each introductory chapter was quite intriguing on its own, the transition from one character to another and the idea that these people’s lives are going to crash together isn’t quite as strong as it could be. This might deter some readers, especially those who don’t often find themselves buried in the tomes of high or epic fantasy very often.

That said, these character’s lives intertwine wonderfully once they do come together. Each character is immediately identifiable and quite memorable, a feat to be sure in a book with this many characters. Something very worthy of mention is the volume of female characters found within Kingshold. Young women, old women—all have an amazing amount of agency and was something I was quite pleased with as, traditionally, women have tended to be sidelined in political, high, and epic fantasy.

There is something inherently wonderful about Kingshold. A strong voice runs throughout the novel, even if it takes a few chapters to find itself. The story walks the tightrope between political fantasy and high fantasy with an ease not often seen in either genre. And while it bears no real resemblance to something like Game of Thrones, its tone, I found, quite often finds itself in a similar place to that of Terry Pratchett.

A Discworld-like feel runs throughout the narrative. Certain characters and certain conversations make this more apparent than others. Jyuth and Hoskin in particular tend to veer into a very Pratchett-esque vein. But the larger tale also falls into this, walking a line between engrossing fantasy, humor, and political commentary. This is a difficult line to tow—too far in any direction and things are liable to start falling a bit apart. But Woolliscroft does so beautifully.

And coming from a debut novel? This is absolutely an author to read.

Kingshold by D. P. Woolliscroft is a book that absolutely begs reading. Fans of high fantasy and political fantasy, be sure to pick up a copy. I’ll certainly be continuing with this series. I’m hooked.