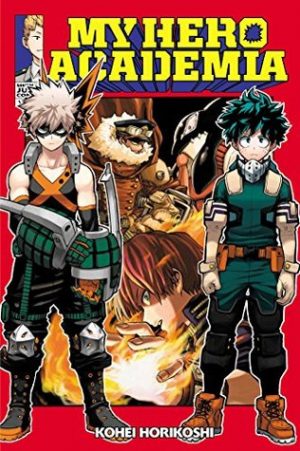 
I’ve been reading My Hero Academia every Monday in Shonen Jump for quite some time now. Yet this volume snuck up on me nonetheless. There’s a lot in here, and I don’t think I picked up on all of the subtleties the first time. My Hero Academia Vol 13 by Kohei Horikoshi is another wonderful volume filled with commentary on hero society, character development, and the conclusion to the licencing exam.

You can find our reviews for My Hero Academia Volume 10 here, Volume 11 here, and Volume 12 here.

Speaking about the 13th volume of something in any great detail is almost impossible without some sort of spoilers, so do be warned going forward, particularly if you’re an anime-only My Hero Academia fan.

My Hero Academia Volume 13 begins where the previous volume left off. The first half of the provisional hero licensing test has ended, and the second half is about to begin.

A lot happens in this volume despite it not being quite as high octane as some of the previous volumes. We see how the world is dealing with All Might’s retirement. Villains are becoming more prevalent, not only joining organizations like the League of Villains, but causing general havoc and chaos, emboldened by the lack of the symbol of peace and general air of uncertainty. Society isn’t ready to deal with this. Clips of television reports and google search terms show just how uncertain the general public feels. No matter how many heroes there are, no matter how oversaturated the hero job market might be, no one can adequately fill the void All Might has left. Not even, or maybe especially not, the new number one hero, Endeavor.

Society as a whole isn’t ready to deal with this, but that doesn’t stop those who created the hero licensing exam from trying to change things for the better moving forward. The provisional license test itself has been tweaked to focus on things like teamwork, because the adults know that this needs to be a very important part of being a hero moving forward.

I found this section somewhat fascinating. It’s filled with contradictions. For example Bakugo lost a great many points due to his conduct during the mock rescue. However, once Gang Orca’s sidekicks starting attacking the disaster zone at will it was Bakugo’s team that stuck it out the longest trying to find and rescue civilians when quite literally every other student was fighting the ‘villains’. In the same vein, Todoroki’s spat with Yoarashi caused real issues, but at the same almost no other students could have gone up against the number 10 hero and stood their ground quite so well. The most obvious of these contradictions is, perhaps, Midoriya being penalized for hesitating while in the field when his fast action during a crisis is what drew All Might to him in the first place.

This provides the sort of silent, somewhat subtle commentary on heroes and hero society that the entire series has touched on. How do you rate the qualities of a hero? What makes a real hero? You can train a person to act in a crisis, but is that really the same as the true heroic spirit All Might embodies? Is the grading system fair to all of the students? The reader knows their strong points and their flaws, but the testers do not. If not for Todoroki’s action, Midoriya and Iida would not have escaped Stain. He’s proven himself in the field against real villains many other heroes fell too, yet it was still not enough. And it’s no wonder that Bakugo could take one look at someone and know that they’re pain is faked. He’s been the one that’s needed to be saved more than once – first with the sludge villain and again with the League of Villains. Despite his language and conduct being wrong, it’s not very surprising Bakugo has absolutely zero sympathy for those who don’t really need to be saved and are simply panicked, and, on the same token, why he (along with Kirishima and Kaminari) were the ones to continue looking for victims while everyone else fought Gang Orca’s sidekicks.

The licensing exam isn’t the entire volume, though. We catch a glimpse of what the villains are doing in the aftermath of the Kamino Ward incident. All Might and the police are also doing some follow up on everything that’s happened. But it’s the end of the volume that has some of the greatest implications on the series as a whole and on Bakugo’s character development in particular.

Bakugo is a strong character, both quirk-wise and personality. But he is still human, and he is still a teenager. Here we see the real effects that Kamino Ward had on him. It isn’t the kidnapping, per se, but All Might and what happened to him that have left the deepest scars. Bakugo blames himself for everything that happened, going so far as to believe that he’s looked up to All Might and tried to emulate him the wrong way his whole life. And, maybe for the first time, really, truly understands exactly how Bakugo feels.

The art is, once again, beautiful. Glimpses of other young heroes with a fascinating array of quirks and interesting character designs continue to be scattered around the page. We also get something fun – a few pages not drawn by Horikoshi, but by the creators of the two My Hero Academia spin off manga. One page each is dedicated to the two My Hero Academia spin-offs. One page is illustrated by Betten Court, the artist for My Hero Academia: Viligilantes with come commentary from the writer, Hideyuki Furuhashi. My Hero Academia: Viligantes is currently available to read for free on Viz’s website, and will be seeing its first physical volume released in English this July. Another page has two 4-panel comics and is done by Hirofumi Neda, the creator of My Hero Academia Smash!, a comedic look at class 1-As day to day life, which is not currently available in English as far as I am aware.

I really want to see how this plays out in the next volume. We are perched on an edge here, with some major character development on the horizon for Bakugo, but for Midoriya too, with their pasts and present so very tied together.

It goes without saying that I will continue with this series. My Hero Academia Vol 13 was another fantastic volume from Kohei Horikoshi, with implications that will effect not only our main characters but the rest of class 1-A going forward. I absolutely urge you to read this volume for yourselves.