Review – Go For It, Nakamura! by Syundei 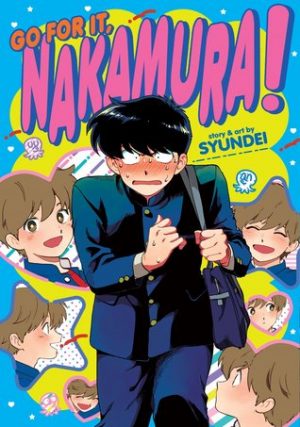 
Go For It, Nakamura! was a very adorable manga. It’s a cute slice-of-life boy’s love comedy story. The main character is Nakamura, a high schooler who fell instantly in love with the cute, outgoing boy in his class on the first day of school. Unfortunately, Nakamura doesn’t know Hirose, not really. His goal? Overcome his shyness and klutzy habits, introduce himself, and become Hirose’s friend. After that, well, maybe then he can confess his true feelings.

I really enjoyed this manga. Nakamura is shy and tends to stick by himself. He doesn’t really have any close friends, and has very little idea how to go about making friends with Hirose let alone confessing his true feelings. The volume is filled with comedic moments and mishaps as Nakamura struggles along. It’s fun, it’s funny, and certain situations Nakamura finds himself in can hit a bit close to home.

The chapters are quite short, especially towards the beginning of the manga. Each chapters is a short, self-contained story of Nakamura’s daily life and endeavoring to finally officially meet and become friends with Hirose. This keeps the pacing quick throughout the manga. The plot never becomes bogged down. Jokes and scenes aren’t lingered over for too long. It moves along at a fast clip.

Despite this having a distinct slice of life feel, the story still has forward momentum. Situations don’t remain static. Nakamura and Hirose do grow closer, though not in any of the myriad of ways Nakamura has concocted. We learn a great deal about the two main characters throughout the course of the volume. Certain side characters also get a good deal of characterization.

As for side characters, there are quite a number of them introduced throughout the course of the story. Classmates are met, proving commentary and an outside perspective to certain situations that arise. We see glimpses of both Nakamura and Hirose’s family. Many of these other characters are interesting in their own right. Their homeroom teacher was well fleshed out, and is a genuinely kind person who wants what’s best for his students. Another of my favorite side characters was the artistically inclined fujoshi in Nakamura’s class.

I really enjoyed the art style in Go For It Nakamura. Nakamura has a certain early nineties aesthetic, especially haircut-wise. His character design has a certain flare similar to the art of Rumiko Takahashi, the mangaka of InuYasha and Ranma ½. While this touched my nostalgic little heart, I also appreciated a one page scene where Nakamura cuts his bangs himself using only a mirror and some everyday scissors, thus explaining his appearance.

Go For It Nakamura! is a wonderful manga. It’s funny. It has gags and misunderstandings. But it’s also very heartfelt. There are some surprisingly poignant moments in the latter half of the manga. The characters grow and change throughout the course of the volume. There is almost no fan service at all. Honestly, this probably one of my favorite high school based comedy series now. It’s right up there with one of my personal old favorites School Rumble. Honestly, it is that good.

I really enjoyed Go For It Nakamura! By Syundei. I highly recommend picking up this series even if you normally don’t read anything yaoi related. It’s a great example of a high school based comedy manga. If any of these are genres you normally enjoy, you should absolutely pick up this manga.