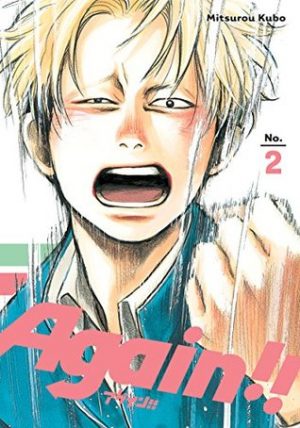 
Earlier this year I read Again!! Vol 1. I enjoyed it, and said I was going to continue on with the series. So here I am having just finished the second volume, making good on my promise to report back you all on what I thought about Again!! Vol 2 by Mitsurou Kubo.

The story continues with Kinichirou trying to thwart the cheerleading club’s efforts to get rid of the ouendan club once and for all. The overall pacing of this volume was extremely fluid. Sections from Kinichirou and Akira’s points of view flowed together very naturally, more so than the previous volume. Several new characters are introduced with extremely varied personalities.

There is subtle humor throughout the manga. Those who have watched a lot of anime and read a lot of manga may find a certain comedic element in many of the scenes simply because they never stray into the more trope filled territory that you might expect, especially for something in a sports manga. One of the more blatant examples of this is when Kinichirou is trying to convince prior members of the oeundan club to return. When an old member who is now head of the karate club states that he will rejoin ouendan if Kinichirou can beat him in a karate match we ready for our non-sportsman protagonist to pull out his protagonist powers and beat this annoying third year in a match. But Kinichirou defies our expectations by stating that no, he isn’t do this, it’s sort of a dumb idea, and that they don’t really need his help that much anyway.

I really loved this aspect of the manga. These sort of scenes happen repeatedly throughout the volume. The majority of the high schoolers don’t have the sort of unwavering, over the top commitment to ouendan, or any club for that matter, that Usami does. They don’t immediately join back up. They aren’t swayed by speeches or by how into others are. It’s easier to convince them not to do something than to spur them to action, which, again, feels all too real.

The art is just as wonderful as the first volume. The characters have very different designs, and each are memorable in their own right. One aspect of the art I really loved was how Kinichirou of now and the past Kinichirou are shown on the page together. The prior Kinichirou, the one who had already graduated high school, is shown behind his current self or else facing in the opposite direction. The two are directly opposed to one another. In fact, the long haired version of Kinichirou standing over the short haired version’s shoulder brings to mind the images of a spirit or phantom. Is it watching over him or is the past a dark smear that will return? I’m not sure which one is meant to be evoked, but I am nonetheless intrigued.

Also, I want to give a huge shout-out to whomever the letterer for this volume was. (I don’t have a copy on hand to look up the name. A name will be included once I’ve found a physical copy again.) I really loved how the English words Ookuma included in sentences when he spoke were written in a different font. While I can’t name the font off the top of my head, I can say that it’s one I don’t often see used for dialogue in manga which made it stand out and get the idea of using words in a different language across without the use of editor’s notes or end notes amazingly well.

Both Kinichirou and Akira begin to truly question why they are there and what happens next. Kinichirou admits that he only wanted to save the ouendan club originally was out of sheer curiosity. Now that it’s on less shaky ground what comes next? Akira, on the other hand, is doing whatever she can to avoid thinking about Kinichirou’s fear that meeting her boyfriend earlier in this timeline has caused some kind of divergence from the original path. Some interesting ideas as to what going back in time has caused and what sort of options are open to them because of this are hinted at towards the end of this volume. Are we perhaps getting a bit more plot based around the time traveling aspect of the plot? Only time will tell.

Again!! Vol 2 by Mitsurou Kubo is a series that combines some light sci-fi elements with regular high school life and I cannot recommend it enough. If you haven’t already started this series I do recommend giving it a try.