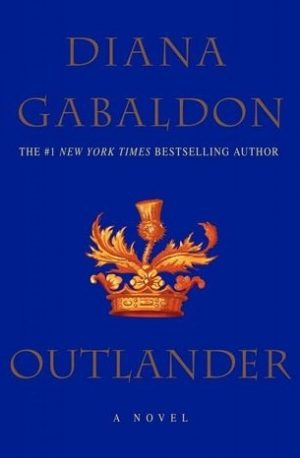 There are many things about Outlander that some people may find troubling, chief among them mention rape, violence, abuse, etc throughout the novel. However, while I find such scenarios difficult to read I could not fault Gabladon for writing the story truthfully. Whether we’re discussing Claire Randall in 1946 and her marital issues or Claire Randall in 1743 and the constant threat of death/rape we cannot deny that these are truthful depictions of these time periods.

Something to be said about this series is the controversy. Is it smut? Is it historical fiction? Is it science fiction/fantasy? I’d vote all the above. For some, that many genres mixed together, along with each side of the spectrum either loving this or hating this (there is no in-between it seems) you have to be prepared to feel strongly one way or the other. This is not, I repeat NOT a casual read.

I understand some people have issues with books over a certain number of pages or book series that go on “too long” for their tastes but hear me out on this one; you might just love it. While Outlander was a bit of a departure for me given the romance angle of the story I couldn’t deny just how interesting and well written the first book in the series is. If you’re uncertain about certain aspects of the book but are looking for a novel that is, simultaneously a historical romance, sci-fi/fantasy with high drama and aciton this is a series you must read. It may not be your cup of tea but honestly it’s worth trying.

Among the things I loved about the first book in this series (and all the others in the box set I bought await to be read and reviewed, I have to say I adore Claire and Jamie. The characterization throughout is spectacular but these two characters, as our main characters, are so well done it’s easy to understand their motives, thoughts, actions, etc. Not only is the characterization amazing Gabladon avoids the cliches of the the romance genre by ensuring us that Jamie is not just there for the romance and Claire is not just there to be saved.

Credit must also be given for Gabladon’s research. Aside from her in depth research regarding the history she has studied dialect, plants, geography, war tactics, politics, etc. Given that the series has continued for eight books and a ninth is in the works (as well as several novellas to accompany the series) it must be assumed that the quality of storytelling continues and that it is reasonable to expect that all the books will be well written, thought out and planned to the last punctuation mark.

Please do not say I did not warn you that this is, in fact, a romance novel! Which means intimate scenes between characters. If you are uncomfortable reading these you must know that you will need to skip a few scenes in this book in order to finish the rest of the book. However, the entire novel is not about getting the characters to fall in love so, for that, I could read this without being stuck/put off by the sex scenes. You have been warned.