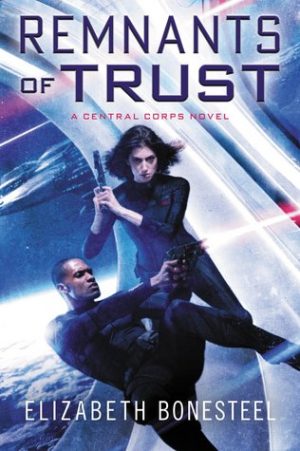 
This week marked the release of Remnants of Trust, the second novel in the Central Corps series by Elizabeth Bonesteel. This is a fast paced military science fiction novel that has a lot going for it. The story begins with Captain Greg Foster and Commander Elena Shaw, freshly returned from a court martial and assigned to the relatively empty Third Sector. But things aren’t quite as quiet as they assumed as the Exeter, another ship from Central Gov, is attacked by raiders. Even after the Orunmila, a PSI ship, comes to the rescue the ship is destroyed, half the crew is dead, and the captain maimed. To top it off, a traitorous saboteur is on the loose.

The book is written in third person point of view with semi-omniscience. We jump around in various characters heads, most notably at chapter changes but other times as well. For the most part we see the story through the eyes of the three captains and their second in commands, plus Elena Shaw, which works in the story’s favor.

Between main characters and secondary characters, there are a good number of characters to keep track of. It never felt out of hand, though, and I never had any issue with keeping who’s who straight. All of the characters were very well rounded. They felt like people. Real people. Normal people. And that’s something I love about this book.

Elena Shaw is tough as nails, but enjoys practicing ballet and struggles internally with happenings both in the first book of the series and farther in her past. Captain Shiang Guanyin of the Orunmila is a twenty nine year old captain, married, mother of five children, and currently pregnant with number six. This side of a female starship captain isn’t often explored, and Bonesteel does it very well. Celik, captain of the destroyed Exeter, is now down a leg, a ship, half a crew, and bent on revenge, closure, anything to try and fix what happened. Yet, Celik retains both common sense and sense of duty to what crew he has left, his captain-ness, if you will, and never turns into the single minded vengeance happy character he could have easily fallen into.

These characters, along with all the rest, are dynamic. They have personalities, hopes, dreams, and real, understandable reasons for the positions they hold on ongoing events throughout the book. None of them really felt like cookie-cutter military officers as can sometimes happen within this and similar genres.

The story moves along at a steady pace. Quieter moments are placed between the action, giving some much deserved downtime in places. Plenty of action moves things along quite nicely, though.

Overall, I would recommend giving Remnants of Trust by Elizabeth Bonesteel a read. It is a highly enjoyable read. I will definitely be reading the rest of the books in the Central Corps series. If you like military sci-fi this is definitely a book for the TBR pile.